WHAT’S TRENDING ON LT
Beit Tamanna: a Dream Come True in Beirut
5 Things to Do in Akkar
5 Ultimate Spring Road-Trip Destinations
10 Things to Do in Chouf
5 Things Foreigners Should Do in Lebanon
The History Behind Beaufort Castle
Beirut’s Mesmerizing MIM Museum
10 Photos That Will Make You Fall in...
Mini Guide to Chtaura
10 Things to Do in and Around Zahle 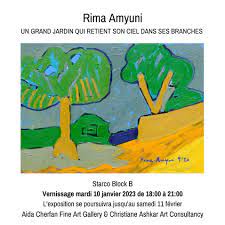 Light in the land of pain Stupor seized by the memory of joy Two eyes, two trees, two windows, two arches, two faces... Life and death face to face, face to face. Next to each other. In bright colors. In bloom. In a relationship with. Without an ounce of makeup. Rima Amyuni has the rare, naked courage to display her weakness and her strength at the same time, in the same place. His work is his portrait confused with that of his country. A wound from which wonders grow. The light in the land of pain, the amazement seized by the memory of joy. A large garden that holds its sky in its branches. To live in the presence of his paintings is to feel consoled and understood.

Light in the land of pain Stupor seized by the memory of joy Two eyes,…

Remembering The Photojournalist by Claude Salhani

Dar al Mussawir invites you to the opening of a photography exhibition entitled “CLAUDE SALHANI,…