WHAT’S TRENDING ON LT
Lebanon’s Five UNESCO World Heritage Sites
5 Ultimate Tips for Your Next Camping Trip
5 Places in West Bekaa Worth Visiting
Discovering the Beauty of the Cedars of God
La Datcha: Haven in Akoura
5 Things to Do in Akkar
Digging into Sidon’s History
Baalbeck: the ‘Sun City’
10 Things to Do in Anjar
Exploring Baskinta with Al Wadi Al Akhdar
Mountains & ValleysOutdoor ActionThemesThings to doWhere to Go 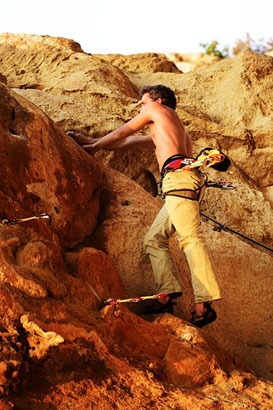 Chediac along a rocky trail down a steep

descent into the valley of Aamchit, North

Lebanon. Dodging thorns he finds the

right path and after a half-hour hike

the amber cliffs come into view. The

the Dreadrock by local climbers, awaits

us. “The climbing routes here range from

who spends most of his spare time rock

climbing. “And more routes are being

added all the time, it’s an on-going

While they take out their climbing gear,

I walk along the steep ridge to see what

the other climbers are up to. High up I

up swiftly. Hanging on to a rock with

the fingertips of his left hand, he takes

out a drill with his right hand and bores

a hole to place a bolt to expand the

route. Where he finds the energy from

is beyond me, but he does, fueled by

out from a phone attached to his belt

…“but if you know what life is worth,

then you would look for yours on earth…”

The guy is George Emille, a 24-year-old

audiovisual student, who lives in

“I cannot really remember when I

began climbing, ” Emille tells me after

touchdown. Calm and serene, he just

smiles when I compliment his bolting

efforts, looking up towards the cliff

obviously more focused on his next

climb than flattery. “So why is this crag

called Dreadrock?” I ask him. “ Take a look,

“he says pointing up to the straggling

hanging rocks, “what do they resemble?”

Mmm, I get it, dreadlocks. His gaze does

not leave the rock and it’s clear that he’s

pondering his new route, “his project”

his friends call it. Four years ago Emille

and the guys used to just top rope down

into the valley. None of the rocks had

been bolted yet. “We used to spend days

just looking at the cliffs dreaming about

I leave him to it and sit down to watch

to finish his own project. A tall blond

guy comes to stand next to me. I have

to strain my neck to look up at him. He

introduces himself as Jad Khoury. “Yalla

Tony, hurry up and finish,” he jokes while

taking out his gear. Khoury and Dagher

explains how as a bunch of friends

they began to bolt the bare rocks a few

years ago. Last year in November, he

Festival together with Dagher and fellow

climbers Emille and Steeve Romanos. It

was a huge success and local climbers

were joined by many other nationalities,

from British, American and Belgian to

“Its great here, I love it,” says Mathias

Gen, a French climber who shows off his

incredible skills later, on a cliffhanger.

“It’s so good to see so many climbers

gathered together sharing the same

“By organizing the festival I wanted

to raise awareness for the incredible

climbing potentials in our country,” adds

Khoury. “Aamchit is just one of the sites.

There is great climbing also in Afqa ,

Tannourine, and many other beautiful

spots in the North of Lebanon.” He goes

on to explain that the Dreadrock, has 20

with each named by the local climbers:

are a few of the little gems. “Dead Snake,

do you remember?” says Romanos,

another dedicated climber, who comes to

you think?” he replies. “We found a snake

in one of the crags.”

“Do you want me to belay you?” asks

Khoury, with a broad smile, holding up

a long blue rope in front of me. I gladly

take him up on his offer and adjust my

harness. Climbing up the route, dubbed

Sojo, was actually not as easy as it looked.

But, a few climbers gathered down below

and encouraged me. “Yalla, you can do

it,” shouted Romanos and I made it to

it,” shouted Romanos, as I let go of the

rock. Looking out to the Mediterranean

the sun was just about to set, turning

the sky into a stunning rosy hue. As the

to pack up and prepare for the hike

back, already discussing the climb of