WHAT’S TRENDING ON LT
5 Things to Do in Akkar
5 Ultimate Spring Road-Trip Destinations
10 Things to Do in Chouf
5 Things Foreigners Should Do in Lebanon
The History Behind Beaufort Castle
Beirut’s Mesmerizing MIM Museum
10 Photos That Will Make You Fall in...
Mini Guide to Chtaura
10 Things to Do in and Around Zahle
Lebanon’s Five UNESCO World Heritage Sites
BekaaExplore LebanonLT LovesNews & Editor's PicksRegionsSustainable TourismWhere to Go 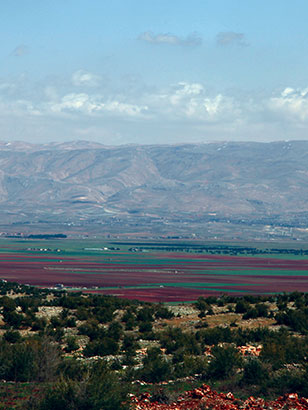 In a northeast Bekaa village, the Women’s Association of Deir Al Ahmar has redefined the role of its women. The founder, Dunia El Khoury, shares their vision for a sustainable future.

Originally from Ghadir, Dunia El Khoury’s adopted village of Deir Al Ahmar and its women have become her life’s passion. She set up the Women’s Association of Deir Al Ahmar (W.A.D.A.) in 1991, a non-profit dedicated to sustainable development and empowering women, which gained legal status in 1994. The volunteer-led initiative, which counts 50 women among its members, is a powerful example of how sustainable development can come from within a community and in 2002 it was recognized for its achievements with the Dubai International Award for Best Practices to Improve the Living Environment.

“My husband is from Deir Al Ahmar. I got married there. I suggested to him that we should do something to support the local community. It’s a very rich area but we don’t really know about its resources,” El Khoury says. “This is why I founded the organization. It’s a long process but it’s very well implemented as the project is really coming from the local community.”

Deir Al Ahmar has important historical significance, located on the Roman road connecting Baalbek to Byblos. It stands at the crossroads between Phoenician, Roman and Greek heritage and the ruins of those civilizations can still be seen. Impressive natural landscapes and mountains surround Deir Al Ahmar. Its many water springs and rich fertile lands have created a region abundant in biodiversity. W.A.D.A.’s missions are many, all with an ecotourism slant and a focus on self-sustainability and protecting the village’s natural, cultural and historical heritage. The association aims to improve the life of the local community, involve women in development, train disempowered groups such as women, youth and farmers and develop agro, rural, religious and eco tourism.

Deir Al Ahmar’s W.A.D.A. center has acted as an incubator for the community since it opened. It’s the headquarters for the association and the site of its many activities. Surrounded by vast gardens, it houses an industrial-sized kitchen where local women prepare regional dishes with local produce such as maakroun bi toum, kaak bil halib, khobeyz’e borghol, freekeh and kebbeh hazineh. They provide a catering service and share the culinary heritage of the area by preparing mouneh in the production center to be sold around the country. Regional crafts are also made in the center and it’s become an educational hub for locals.

“We wanted to enhance the role of women and improve the living environment in the rural areas in Deir Al Ahmar,” El Khoury says. “It’s our village. We have to fight to improve the environment because it’s a rural area, and there are lots of problems like migration. It’s our role to contribute to sustainable development.”

W.A.D.A. has also put a structure in place to activate and improve rural and ecotourism to attract tourists, provide income for local families and kick start the local economy. They work with local farmers to promote organic farming and support two organic wineries, Barka Wine and La Couvent Rouge. There is a network of 30 guesthouses, with locals encouraged to renovate their homes and open them to visitors. W.A.D.A. has launched various environmental awareness campaigns and worked with local schools on paper recycling. The association has recently launched a new small grants project Zaater and Zayzafoon, which culminates in a weekend festival in May. The project promotes the conservation of zaatar (wild thyme) and zayzafoon, a flowering tree, both native to the region but in decline. “We want the local community to replant these trees because there are only a few left. Through the annual festival our objective is to conserve these two species which are at risk,” El Khoury says.

“There are economic opportunities in rural tourism; it’s very important for us. Through this we can support the local community and have direct income,” El Khoury says. Though the country’s current political instability has posed a challenge in bringing tourists into the village, El Khoury is confident that they now have the right structure in place for a sustainable future. “We’re convinced it’s an important sector for us.”

It’s W.A.D.A.’s “bottom-up” approach to development, directly involving the locals, that’s clearly the key to its success. Local women have been given a voice and now have an active role in the village’s development. “Before women had no role, now they are very strong. Now there is a big change in the community. Women are fighting to have a role in decision-making and as a result the opinion of men towards them has changed.”

W.A.D.A. has a 30-strong network of local guesthouses in Deir Al Ahmar. Stay in a traditional house with local villagers for the authentic experience.

Eat in WADA Center where women from the local community prepare traditional food or prepare your own meal while learning from the masters with a preparation course in culinary tradition food or mouneh.

Take a hike from W.A.D.A. center to the ruins of Saydet El Borj built on a Roman temple and the old village.

Visit Our Lady of Bechwat and the biggest rosary in the world with a hike from Bechwat finishing at local vineyards.

Visit one of the 20 farms linked to W.A.D.A., producing dairy products, organic fruits and vegetables and experience rural life from fruit picking to making cheese, rose water or arak.

W.A.D.A. organizes all visits with a local guide.