WHAT’S TRENDING ON LT
5 Places in West Bekaa Worth Visiting
Discovering the Beauty of the Cedars of God
Lebanon’s Five UNESCO World Heritage Sites
La Datcha: Haven in Akoura
5 Things to Do in Akkar
Digging into Sidon’s History
Baalbeck: the ‘Sun City’
10 Things to Do in Anjar
Exploring Baskinta with Al Wadi Al Akhdar
Villa Chamoun Guesthouse, a Retro Revival in Hasroun
Outdoor ActionThings to doWater SportsWhat to Do

We’re surrounded by it day in and day out, but how many of us have actually explored the deep blue sea? 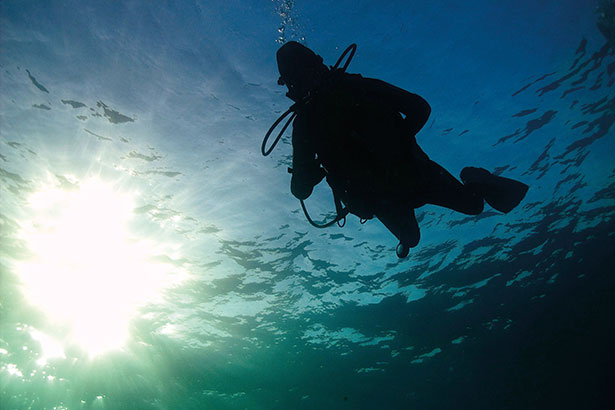 Since Jacques Cousteau developed the Self-Contained Underwater Breathing Apparatus (SCUBA) in 1943, diving enthusiasts have explored a wondrous world of nature and wildlife from coast to coast. Lebanon is teeming with dive sites from French submarines to a stingray reef. Here’s what you need to know about scuba diving before heading out to open waters.

Scuba diving requires proper training and a certificate from a reputable organization. Luckily Lebanon is considered an international diving spot with several accredited centers. Certified instructors, who teach theory and practical application both in a pool and open water, conduct courses.

The Open Water Scuba Diver course from the National Institute for Scuba Diving is an IANTD program that offers three theory sessions and seven dives with a maximum diving depth of 18 meters. Included in the course are a complementary book, logbook and wall certificate, all scuba equipment during pool and sea sessions, beach entrance, international license as well as insurance coverage throughout the course. With your certificate in hand, Lebanon’s coast will have twice as much to offer.

For first-time divers eager to get back into the water after earning their license and wanting to purchase their own gear instead of renting, do make sure everything fits properly and is comfortable so you can focus on your dive and not the equipment. 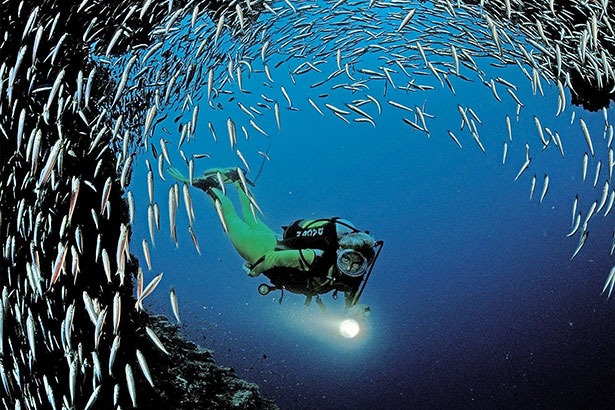 Here’s what you need and what’s cool to have:

Here is an essential guide for divers of all levels of experience compiled by Walid Noshie, owner of Water Nation and the National Institute of Scuba Diving. 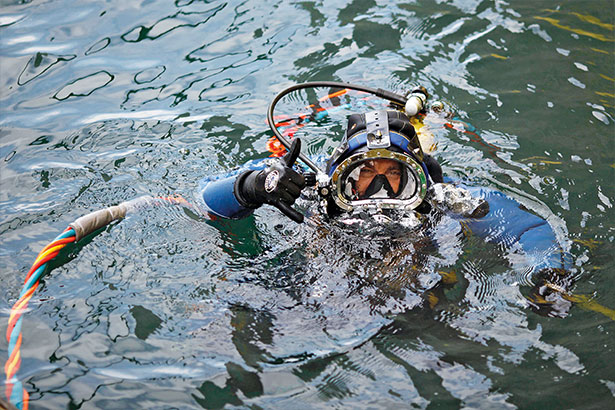 AUB Canyon was one of the best diving spots known in the ’60s. It used to be called the Sharks hole since fishermen used to catch sharks from the deep end of the canyon. Nowadays, sharks are almost nonexistent on that spot. The walls on this reef are steep, beautiful, full of small caves and fishermen’s nets, with a huge old anchor lying at 43m.

Shark point is an area composed of 5 reefs, which includes some plateau sections and a deep canyon running along every reef towards the east. Crossing one reef to the other towards the north are sand beds in between, making the passages look like huge corridors. At the third reef, divers will admire a statue of a Lebanese saint praying above a small cave in which stingrays take refuge. At the 4th reef is a vertical wall with a rugged profile full of fissures, inlets and crevices to explore. The 5th reef towards the East is where most sharks are observed.

The “Souffleur” can be ranked among one of the best WWII wrecks in the world. It is a French submarine, which sank in battle, badly damaged and cut in two, but virtually intact. Divers will find plenty of open holes from fishermen dynamiting the site for fish. They look very tempting to discover, but beware of narrow passages and silt that will immediately cover your trace, making entry extremely hazardous.

The “Macedonia” was a cargo ship sailing regularly between Egypt and Lebanon in the early 1960’s. On a stormy night, sailing too close to shore, Macedonia hit the shallow reef off Raouche making a huge hole in its entire front lower hull. The wreck split in two, one part on the sandy side of the reef and the other on the rocks. It is fairly well colonized by different species of fish, including groupers and lobsters in the spring.

The Tunnels are a crack in the rocks towards the west, 7m wide and 100m in length, which make it look like a passage between two walls. Marine life is pleasant with a reef fish population that seems concentrated on this small spot due to favorable conditions. 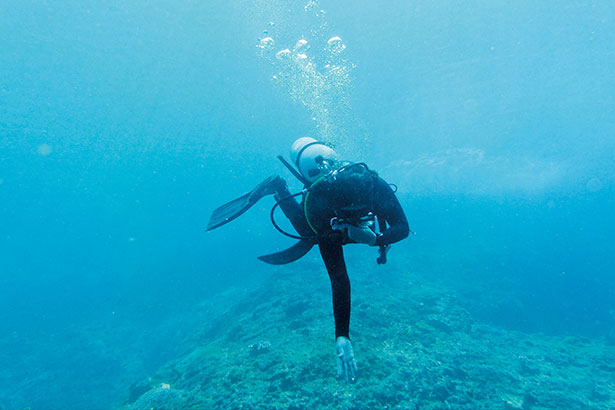 The dive site encompasses a wide, oval sloping patchy reef that extends to the west of the circular reef top. The reef composition is quite varied, with patchy sections in sand beds. Fish life is not great, but in June and July, the sand beds and reef bottom crevices will surprise you throughout the haul dive. It is not unusual for divers to encounter as many as 10 rays in a single dive. From stingrays to electric rays to Thornback rays and even eagle rays. The reef slope is suitable for relatively inexperienced divers while more experienced divers will enjoy the incredible experience of seeing such a diversity of rays.

Alice B is not an old site but on a good visibility dive, it is very interesting and exceptionally photogenic for underwater photography divers. The ship is resting on the flat bottom, 38m from the surface. Starting at the main control room, the area is wide and accessible by most divers. It is advisable that divers be specialized in wreck penetration before attempting entry into the interior.

The name of this wreck remains a mystery. This ship was used as a Torpedo Carrier supplying the Vichy submarines with torpedoes in the open sea. The ship was sunk after receiving a direct hit either from an allied ship canon or bombed from an airplane. On a good visibility dive, it is very interesting and exceptionally photogenic for underwater photography divers with about 10 submarine torpedoes lying on the deck. The ship is resting on the flat bottom, 60m from the surface.

The HMS Victoria was the flagship in the Mediterranean of Admiral Sir George Tryon. Part of the Victoria Class turret ship of the Royal Navy, the HMS Victoria was rammed and sunk by HMS Camperdown on the 22nd of June 1893. Admiral Tryon intended the maneuvers and the anchoring to be an impressive sight to the entire British Navy fleet, but unfortunately, the two battleships met halfway. Camperdown struck the Victoria on the flagship’s starboard side, opening up an enormous hole at and below the waterline. Victoria’s bow went down and the stern rose with the propellers still turning. Today, the HMS Victoria is resting at the bottom in a vertical position with the stern upwards starting at 75 meters. 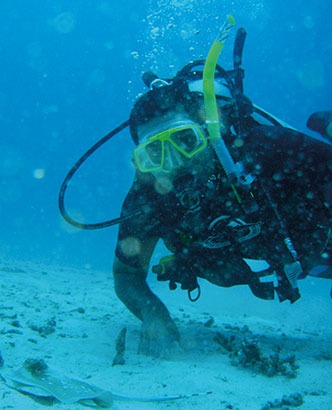 “The year was 1981. I was on a normal dive with my brother in an area I had just discovered a few days earlier. We were moving on the higher plateau wanting to extend our dive time, depth was 27m.

A few minutes later, I realized that in order to see more marine life, we had to drop to 34m to be able to see the lower part of the wall. The visibility was not excellent that day.

Moving towards the bottom, the seabed came in sight. With it came a huge shark moving straight towards me. There was no place for fear since that huge animal was only 2 m away from me.

My brother, until then, had seen nothing since he was still on the plateau getting ready to follow me. I grabbed the wall and started climbing back upside-down until I reached my brother and I warned him of what’s below. He moved cautiously to the limit of the wall and here was the shark passing at a speed of 4 km per/hour looking towards us as curious as we were.

We thought that this was a one-time encounter yet every year, we saw the sharks again and sometimes as many as five sharks around us. After a few hundred dives on that site, we concluded that these animals would come to that same spot every year, stay around 2 months and leave again.

Start the dive 20 m away from that spot and you won’t see any sharks at all. That’s where the name, Shark Point, come from.”