WHAT’S TRENDING ON LT
Lebanon’s Five UNESCO World Heritage Sites
5 Ultimate Tips for Your Next Camping Trip
Discovering the Beauty of the Cedars of God
5 Places in West Bekaa Worth Visiting
La Datcha: Haven in Akoura
5 Things to Do in Akkar
Digging into Sidon’s History
Baalbeck: the ‘Sun City’
10 Things to Do in Anjar
Exploring Baskinta with Al Wadi Al Akhdar
Explore LebanonMount LebanonOutdoor ActionRegionsThemesThings to doWaterfalls, Lakes & RiversWhere to Go 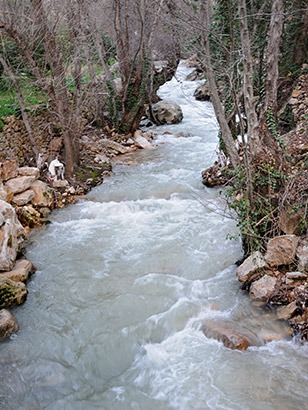 The Shouf Biosphere Reserve‘s Mirna Riman takes us on a walk along the ancient trail of the Barouk River Valley, where history and nature collide

With the transformation of the season, as landscapes are touched by that autumnal glow, fall can be the best season to explore Lebanon’s rich outdoors. Hiking an ancient trail under red and yellow leafed trees by the flowing waters of the Barouk River is an experience not to be missed.

The unique trail is suitable for hikers of all levels and is also easy to reach. Located near the village of Mokhtara, just a few kilometres away from the Shouf Biosphere Reserve, the trail is a rare beauty and features historical monuments from the Hellenistic and Roman eras to the Mamluk and Ottoman periods. Hiking in the Shouf offers a unique journey through time.

The trail was inaugurated back in the spring of 2011 after months of hard work to rehabilitate it, and restore the old bridges. A team of volunteers explored the Barouk River Valley and discovered traces of an old road network that used to link the narrow valley to Jezzine and Nahr el-Awwali. They managed to open 8km of paths, parts of which retrace the old Mamluk and Ottoman roads.

The bridges located at the bottom of the valley used to link the different parts of the valley, allowing people to cross from one side to another, and opening up trading connections. After removing dense vegetation archaeologists rehabilitated four of these bridges, creating a complete trail for visitors to explore.

One of the oldest and most spectacular bridges in the area is Birket el-Arouss, an impressive stone bridge built at the end of the Mamluk period between 913 AH to 1507 AD. Also on the trail are four water mills constructed during the Ottoman era. Using only hydrologic energy, they produced olive oil and flour until the middle of the 20th Century. Visitors can still observe the remaining structures of these well-engineered mills.

In addition to visiting the ancient bridges and mills, hikers can explore the Hellenistic fort of Qasr Swayjani in the village of Kahlouniye, which is an hour-long walk from the Cheikh Houssein stone bridge. There is also an option to leave the river trail and hike along an old Roman road linking the Barouk Valley and the Marj Bisri Valley to the Mazraat el-Shouf village, which is rich in Roman antiquities. Archaeology enthusiasts can also visit a Roman temple located on the intersection of the Nahr Aray and Nahr el-Barouk, today buried beneath meters of fluvial deposits. Four columns of black granite and the temenos wall are visible, protruding from meters of fluvial deposits.

One of the trails entry points begins at the Church of Our Lady in Mokhtara and passes under the Mamluk bridge of Birket el-Arouss, along the Barouk River and over the Badde bridge, before heading into the western slope of the river valley. The trail continues south on a recently renovated footpath, along the Barouk River on the left of which is the Badde Water Mill.

The trail then proceeds to the Bou Matar bridge and Water Mill, up the eastern slopes below the village of AinQanye. After crossing the AinQanye stream it then begins a slight descent to the valley passing over an aqueduct belonging to an old water mill before arriving to the bridge of Sheikh Hossein. From this bridge hikers can reach the Hellenistic fort of Qasr Swayjani.

Below the village of Amatour the trail points south towards the village of Haret Jandal, and crosses the Salman River before reaching the bottom of the Barouk valley. It then runs along the Barouk River, crosses over a small stone bridge at the Ain el-Zaïtoun stream and arrives at Marj Bisri, where the four columns of a Roman temple can be found.

Head south of Beirut, on the coastal highway towards Sidon. After 17km, take the Beiteddine/Deir el-Qamar exit to the right. The road heads towards Nahr ed-Damour before climbing into the mountains. You can reach Mokhtara from Baakline or Beiteddine. From either direction head towards Semqaniyye then Beqaata. From Beqaata, follow the Mokhtara village signs.

GO WITH A GUIDE