WHAT’S TRENDING ON LT
5 Ultimate Spring Road-Trip Destinations
10 Things to Do in Chouf
5 Things Foreigners Should Do in Lebanon
The History Behind Beaufort Castle
Beirut’s Mesmerizing MIM Museum
10 Photos That Will Make You Fall in...
Mini Guide to Chtaura
10 Things to Do in and Around Zahle
Lebanon’s Five UNESCO World Heritage Sites
5 Ultimate Tips for Your Next Camping Trip
Explore LebanonMount LebanonRegionsWhere to Go 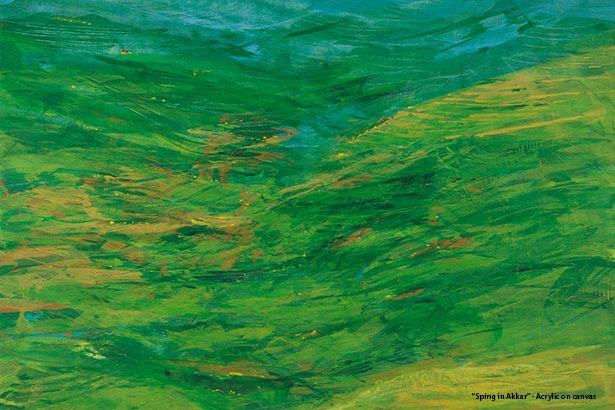 From the riverbeds at its foothills to the heights of its snowy summit, Mount Sannine has fascinated Lebanese painter Chaouki Chamoun since childhood

Born in the village of Sariine, in Lebanon’s Bekaa Valley, facing the east side of the majestic Mount Sannine, Chaouki Chamoun is one of Lebanon’s most renowned living artists. Although he left his birthplace decades ago, it lives on in both his heart and his work. Though no written records exist, Chamoun estimates that his family’s history in the village dates back at least a few hundred years.

A smile crinkles the corners of Chamoun’s mouth when he reminisces about his childhood. “When I lived in Sariine as a child I always felt that it was where the world ends… That sense of astonishment has left its mark on me in many different ways. Being the son of an army man and a peasant family, I felt I was always part of that hardworking landscape of the town. It was an incredible, lively life that I lived as a child.”

When Chamoun was just 11, the owner of a boarding school came to Sariine and noticed his artistic talent. His parents were only able to send him to school by paying the fees in crops rather than cash. Chamoun went on to study art at the Lebanese University, graduating in 1972 at the top of his class. He was granted a scholarship to attend graduate school in the U.S., where he worked and exhibited for the next six years.

“[Back then] I was moving back and forth between Lebanon and the U.S. until 2004… but the scholarship was granted with the intention that I come back and teach, and that was always on my conscience,” Chamoun says, who has taught at the Lebanese American University since 1997. “Although I excelled and exhibited in the U.S., I always felt a sense of belonging to the culture of this country. This is the land of my ancestry, and the Lebanese have a special attachment to their land, to the people. Lebanon is where I feel I’m [painting] a subject matter that has meaning to me.”

Chamoun’s attachment to the land shines through in his breakout Riverbed series. “I spent a lot of time at Nahr el Kelb and did many landscapes there. I climbed up the mountain and looked down [at the riverbed] from the top, to see it from a new angle. That was the time when I started to experience abstract art, modernism. I went to the U.S. and became aware of the achievements of American abstract expressionists such as Frankenthaler, Pollock, Newman. I felt very attached to their work. It was then that the Riverbed series came to fruition, and I created many paintings between 1974 and 1977. Even when I moved to other things, the Riverbed concept remained part of my painting landscape.”

While Chamoun no longer visits Sariine often, he stays connected to his mountain through his summerhouse in Dhour Choueir. “I see Sannine from the other side, from a distance. Our house is on the top of a hill, and we have a beautiful view of the west side of Sannine. It brings back memories, and I still feel the connection with my childhood. When I look at and draw Sannine, it’s still the mountain from my childhood.”

Mount Sannine featured in Chamoun’s 2014 exhibition, Peace in Waiting, at the Mark Hachem Gallery in Beirut; the mountain’s imposing size is accentuated by a line of small figures at its base, a detail repeated in his paintings of the Arabian Desert.

“Up to this moment I feel that I haven’t even scratched the surface of Lebanon’s landscape. It has touched my heart in so many ways,” he says, adding, “When the snow covers Sannine it makes me forget sadness in the eyes of earth.”

Al Nahr restaurant (04 288197), on the Baskinta-Kfarzebiane main road, and Kasr al Bouhaira in Zaarour (04 296200) offer traditional Lebanese cuisine and exceptional views. Also in Baskinta, Aammo Krikor has been baking his famous manoushe for over 50 years.

The historical Grand Hotel Bois De Boulogne (04 295100), not far from Dhour Choueir, takes its name from the pine forests it overlooks. The Mar Sassine Convent (04 288030) in Baskinta hosts guests in simple but reasonably priced rooms.

In warm weather, Chamoun suggests visiting Baskinta, to have lunch at one of the beautiful restaurants at the foot of the mountain. Baskinta is renowned for its poets and novelists, and the Literary Mountain Trail is popular for hiking (see lebanontrail.org for a map, guides, recommended reading and more). In the winter Chamoun recommends heading to the ski slopes at Zaarour.