WHAT’S TRENDING ON LT
5 Ultimate Tips for Your Next Camping Trip
Discovering the Beauty of the Cedars of God
5 Places in West Bekaa Worth Visiting
Lebanon’s Five UNESCO World Heritage Sites
La Datcha: Haven in Akoura
5 Things to Do in Akkar
Digging into Sidon’s History
Baalbeck: the ‘Sun City’
10 Things to Do in Anjar
Exploring Baskinta with Al Wadi Al Akhdar
Art, History & CultureBeirutBy RegionExplore LebanonThings to doWhere to Go

The old stairs of Mar Mikhael and Jeitawi have seen the city transform around them. They hold memories of the city’s past; but as Beirut becomes more urbanized, like the old communities that surround them, they face an uncertain future. 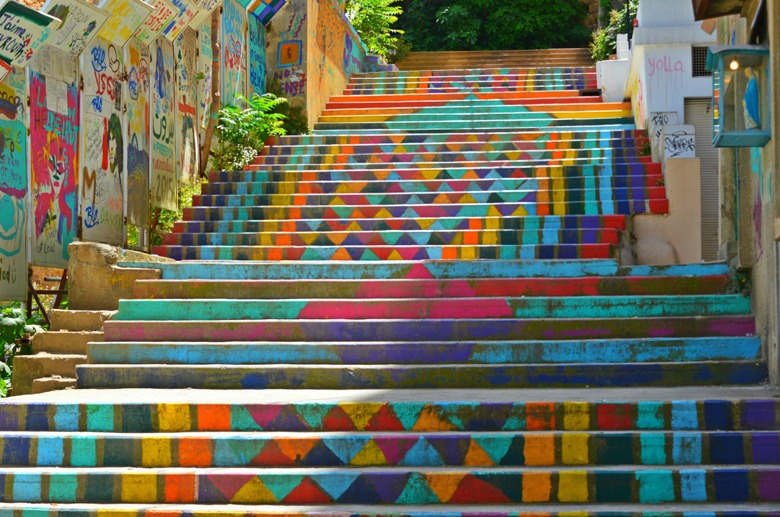 Eight major stairs connect the two neighborhoods of Mar Mikhael and Jeitawi, and a few smaller ones are hidden between. Once these semi-secret alleyways built haphazardly by locals were the only connection between their houses and the train station below. Now they are the link to old Beirut, passing through communities that seem unchanged from the 1950s; communal living in outdoor spaces, shared gardens and daily coffee and conversations.

The wide stairs named Geara are still full of life. Also known locally as the Vendome Stairs, even their name harks back to another era, a remnant to the cinema that once stood at its side, replacing the Olympic Cinema before it closed in 1979. Houses line the sides of the stairs, which are the only access to resident’s front doors; the public space has become their shared garden. Elderly residents still gather in a circle of chairs to drink coffee every morning; at the top of the stairs mural and graffiti-covered walls are lined with plants and trees, punctuated with religious icons, an urban garden enjoyed by all.

Many of the local residents have very personal attachments to the stairs and there are hundreds of stories, from donkeys going up and down them carrying produce to the stairs being used during the civil war to transport weapons.

For local resident Tony Akoury, who has a barbershop opposite the Vendome stairs, the stairs are particularly symbolic. Once a projectionist at the La Vendome Cinema, he fondly remembers the first ever screening of “Wild Geese” in 1979. “I remember going down the stairs on my motocross bike during The Hundred Days War with Syria, avoiding the bombs,” he laughs.

While many of the city’s old heritage houses have been pulled down and replaced by high-rise apartments, it’s perhaps a surprise that the stairs have managed to survive until now, but it’s actually due to their unusual legal status. Built on private land, many of the stairs cross the plots of several houses. The future of these stairs simply rests on a few residents refusing to sell.

The sound of construction now dominates the sleepy neighborhood around the Vendome Stairs. The stairs were only recently saved thanks to the decision of a resident not to sell. The view from another set of stairs rests on Bernard Khoury’s Skyline Tower. It’s perhaps the perfect symbol of the changing urban fabric of the city – a stark contrast to the old neighborhood close by.

A number of associations are working to raise awareness of the stairs, one of which is Paint Up!, an NGO that goes by the name the Dihzahyners. They started an initiative to paint and refurbish the stairs between Mar Mikhael and Jeitawi bringing color to grey urban areas. “We aimed at making a real difference in the landscape of Lebanon, and really changing communities that people live in. We thought that we would start with stairs and have it grow into a real movement to reshape the way Beirut looks,” say the Dihzahyners. 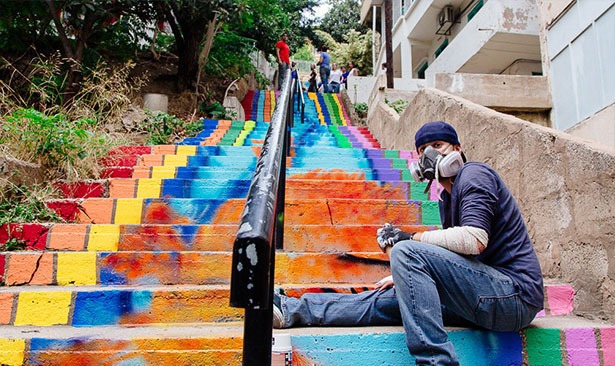 Founded by Lana Chukri and Jubran Elias, the NGO that started with just 12 members continues to grow and evolve. “We do feel we are making a change to the community. Neighbors in the areas we have painted have thanked us, joined us, and rejoiced in the color we spread in their streets,” say the Dihzahyners. “Beirut’s old stairs are everywhere, they connect neighborhoods together and at the same time it connects people houses together which means it connect people hearts together.”