Who can forget Baalbeck International Festival’s magical offering this summer. We speak to Dr. Harout Fazlian, principle conductor of the Lebanese Philarmonic Orchestra, to hear more about the special performance that united audiences around the world. 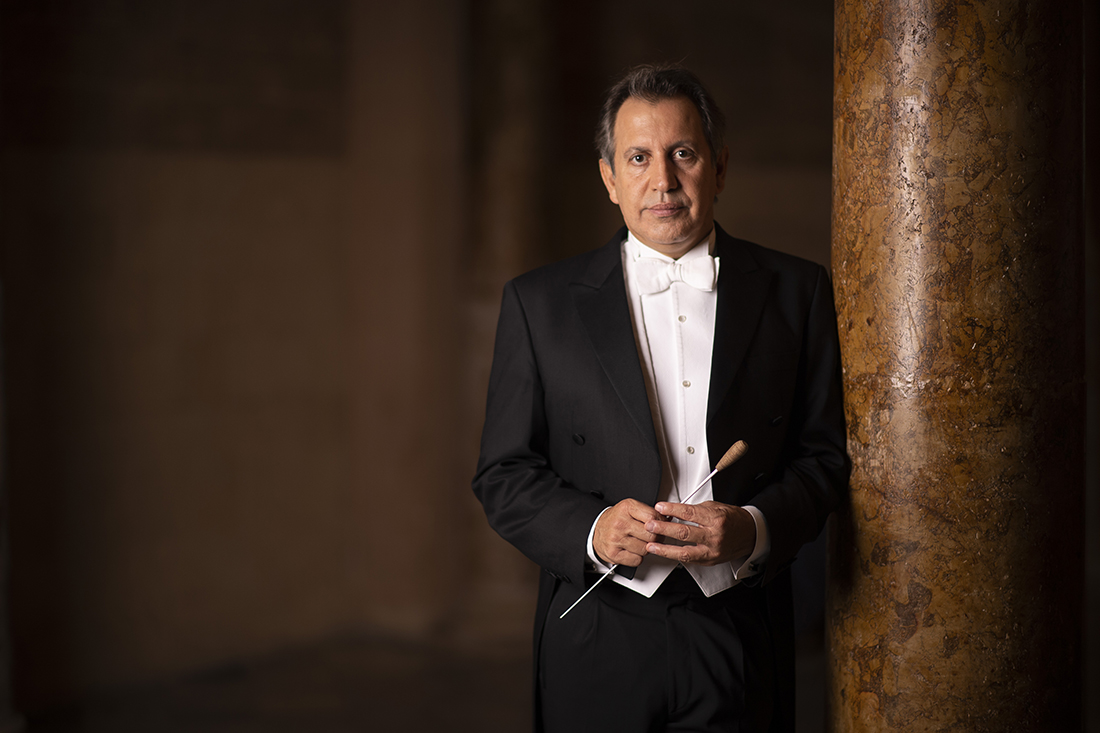 You are the principal conductor of the Lebanese Philharmonic Orchestra and have conducted concerts of Lebanese legends such as Julia Boutros and Fairouz for the best part of 20 years. Tell us about your musical journey.

I was born in Beirut in 1962 to a family of artists. My late father, Berj Fazlian, was a famous theater director, and my mother is a painter. Since childhood, I was exposed to many colors and sounds, whether these were in the form of paintings or theater rehearsals. I spent a lot of time at the theater when I was young, so the stage was a natural environment, somewhere that felt and still feels like home. In fact, I often joke about the fact that I must have been born backstage in a corner of a theater and not a hospital because the atmosphere of a backstage feels so familiar.

I was always surrounded by music. My mother and aunt were both pianists, and my grandfather used to sing. At home, we had a lot of records: classical music, pop music as well as the plays of the Rahbani Brothers sung by Fairouz, as my father directed most of the Rahbani plays. I started taking piano lessons at an early age, and at one point I began practicing the violin at the National Conservatory but did not continue it.

In 1976, we emigrated from Beirut to Montreal. I was 14 years old at the time. After receiving an electric guitar for Christmas, I started to play and listen to rock music. In my high school years, I formed my own band, and we became quite famous in the city. We even toured Canada, playing at different clubs and venues. I learned so much during that period because I was on stage every night performing to a wide spectrum of audiences at so many venues. My stage presence developed, and I realized the importance of being a professional, regardless of whether we were performing to a full house or a handful of people. 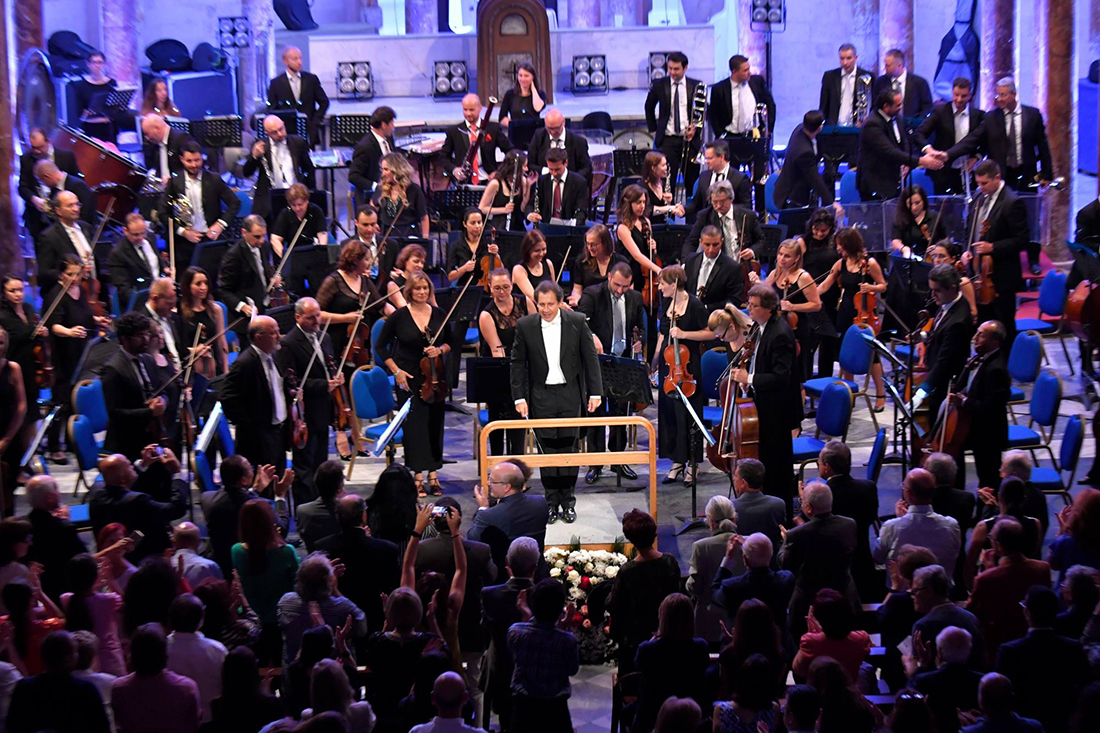 After obtaining my Master’s Degree in Symphony and Opera Conducting in 1990, I returned to Montreal where I began my career as a conductor. I conducted numerous concerts in Canada and in Armenia during those years. In 1996, there was a chance for me to return to Beirut. The director of the Lebanese National Higher Conservatory of Music Dr. Walid Gholmieh had already started to reestablish the conservatory following the end of the war. He also had the idea to create the symphony orchestra, so I sent him my ideas and my willingness to be part of this process as we never had a professional symphony orchestra in Lebanon. I therefore came to Lebanon in 1996 and started teaching at the conservatory and helped Dr. Gholmieh build the philharmonic orchestra. We had our inaugural concert in 2000, and I remained one of the main conductors of the orchestra. In 2012, I was appointed the principal director of the Lebanese Philharmonic Orchestra, a position I am proud to hold to this day. 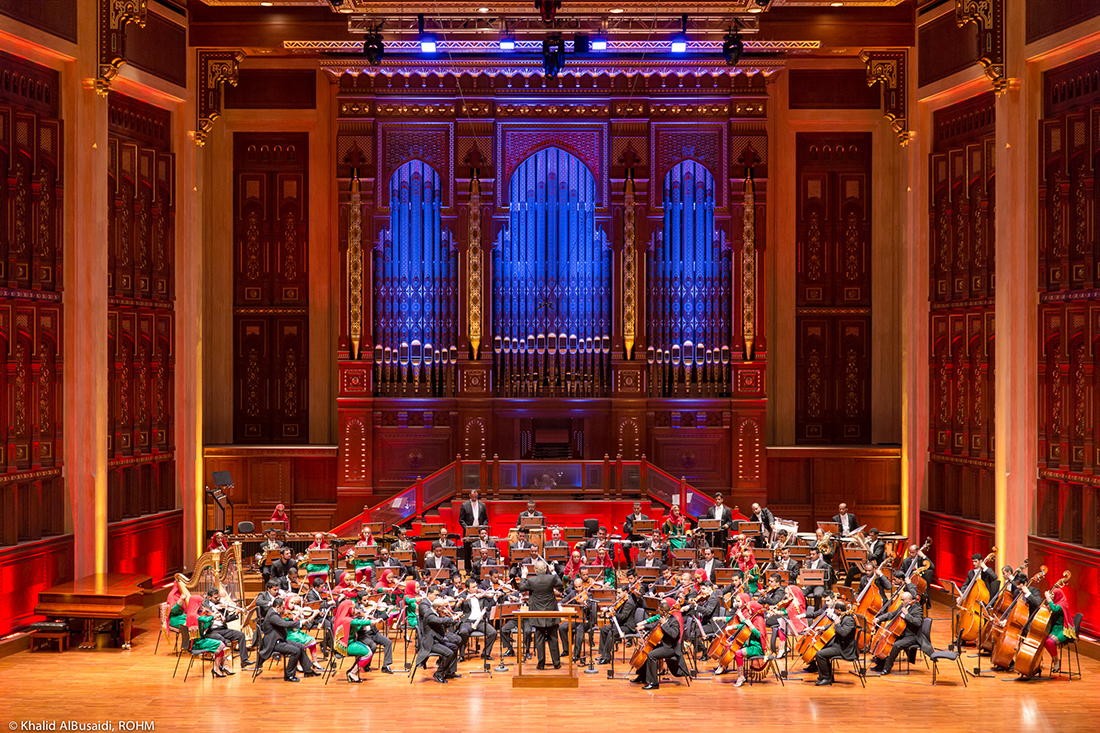 You’ve conducted concerts from China to Brazil. Which has been the most memorable of your career and why?

In terms of classical concerts, there are many. The first time I conducted Beethoven’s Fifth Symphony was certainly memorable. Also, conducting the philosophical and spiritual music of Wagner or the overly emotional music of Tchaikovsky never fails to leave an impression on me. The concerts I have conducted in China, where I witnessed the true meaning of music being an international language, remain locked in my memory.

I’ll never forget the Christmas concert I did at the presidential palace. We put together a choir of children with special needs: kids who were blind, kids who were deaf and those with autism. It was an incredible feeling and a challenge as a conductor. We transmitted the message that nothing is impossible. Conducting children that can hear but can’t see and those that can’t see but hear proved to be a very emotional evening.

The concerts of Julia Boutros have also been incredible — hearing 12,000 people sing in sync with her music; it’s a euphoric experience. And of course, the concerts of Fairouz. I would have never thought the Lebanese icon I used to watch at the theater and see backstage when I was a child would be someone I would share a stage with and whose concerts I would conduct later on. 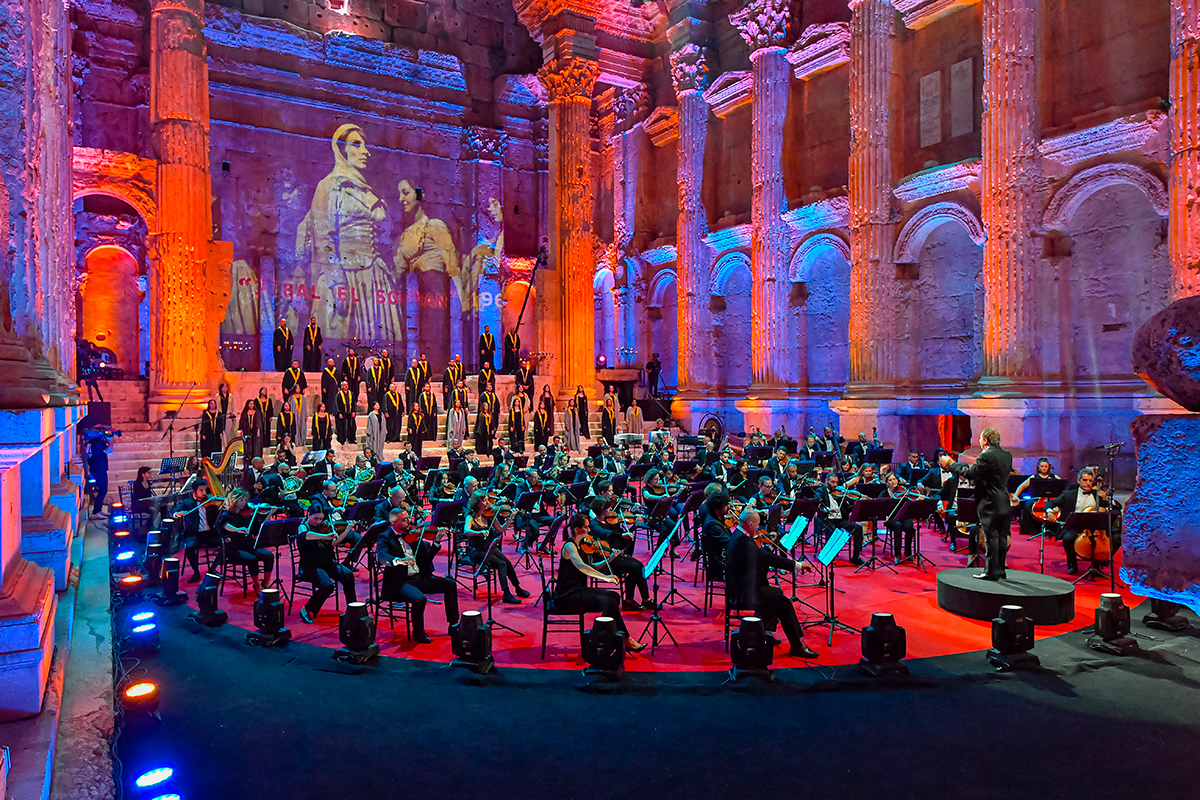 You and the orchestra lit up the Bacchus Temple at the Baalbeck International Festival this year. How challenging was it to organize this special edition?

The most challenging part was putting the concert together amid the COVID-19 pandemic. Respecting social distancing was difficult, and I kept reminding the orchestra and the choirs that this was the first time a concert was being performed with such a large number of musicians during the COVID-19 pandemic. We had 170 musicians and choir members performing together on stage, so we had to create guidelines because the situation was unusual and unprecedented. I am proud to say that once we have finished fine-tuning the guidelines, they will be published and available for orchestras around the world: guidelines on how to get people on and off stage, in and out of buses, rehearsals, stage setup and seating arrangements for the musicians and the choirs.

Everything worked out, and people are still talking about it. The effect it had on people was overwhelming, and I think the reason for that was because it wasn’t just a concert — it was a message. 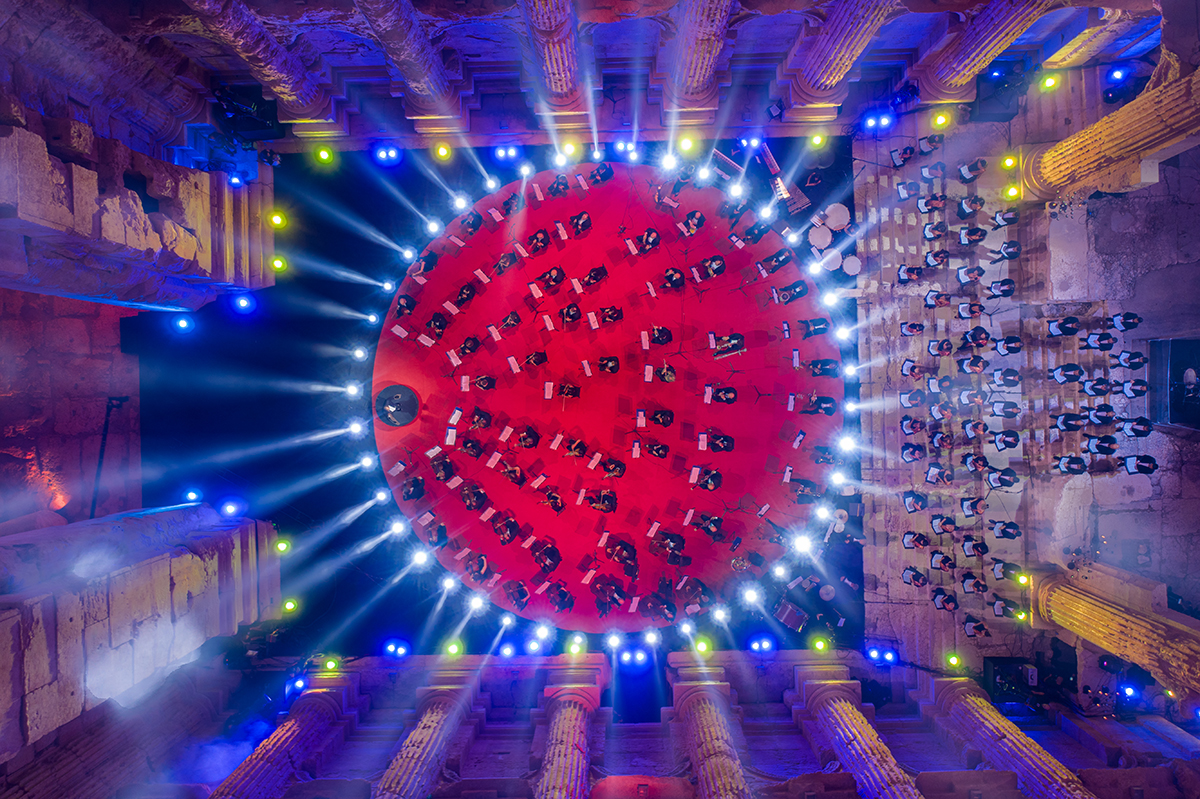 Your son, Berj, was part of the orchestra at the Baalbeck Festival. How emotional was the experience for both of you?

It wasn’t the first time Berj and I performed together. He previously performed with me in the KSA in front of 5,000 people. But being in Baalbeck was of course very special. Being on such a big stage was very emotional for him as was for me. On stage, I’m the conductor and he’s one of the musicians. Off stage he’s my son — my pride and joy.

Interestingly, my father directed many plays in Baalbeck. So what made this concert even more meaningful was that three generations of Fazlians have performed on that iconic stage. That’s quite something. 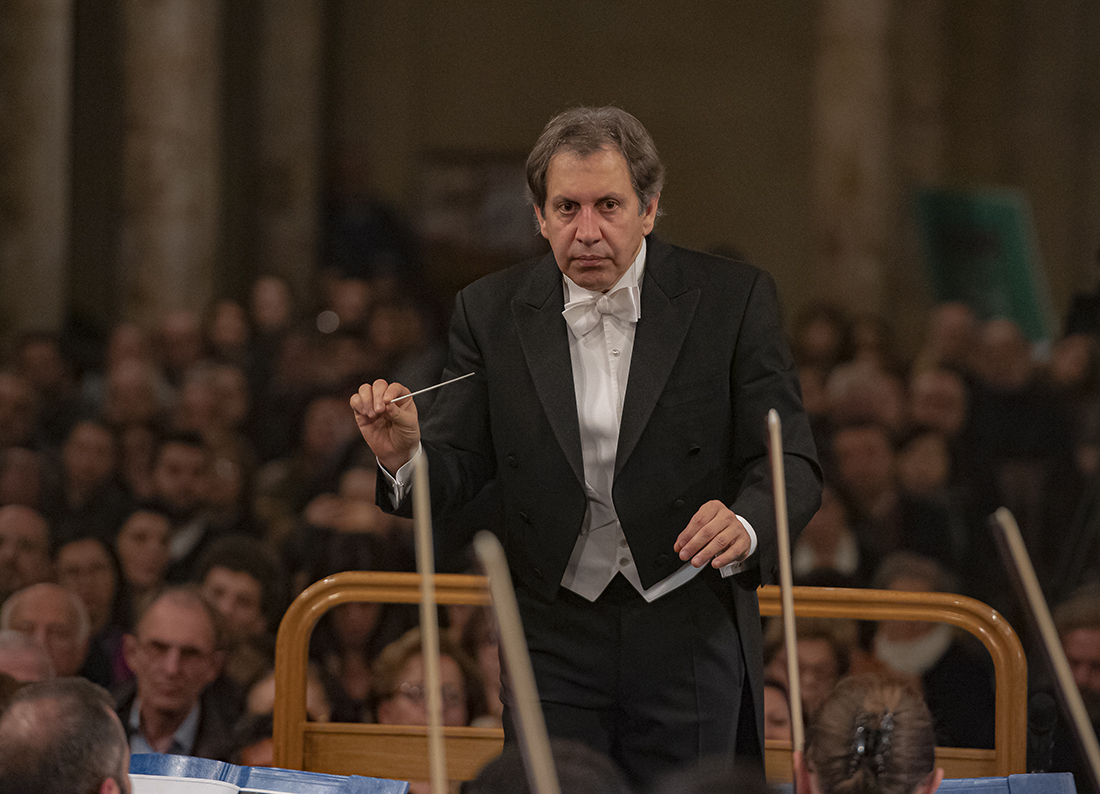 If you could perform on any stage in the world, where would you choose, and why?

I’d love to perform at the Berliner Philharmonie. The reason is that there is so much history there, and I grew up listening to Herbert von Karajan. Being on that stage, conducting the Berlin Philharmonic Orchestra, would be an absolute dream come true.