WHAT’S TRENDING ON LT
5 Things to Do in Akkar
5 Ultimate Spring Road-Trip Destinations
10 Things to Do in Chouf
5 Things Foreigners Should Do in Lebanon
The History Behind Beaufort Castle
Beirut’s Mesmerizing MIM Museum
10 Photos That Will Make You Fall in...
Mini Guide to Chtaura
10 Things to Do in and Around Zahle
Lebanon’s Five UNESCO World Heritage Sites
CyclingLT LovesNews & Editor's PicksOutdoor ActionPeopleThings to doTrendingWhat to Do 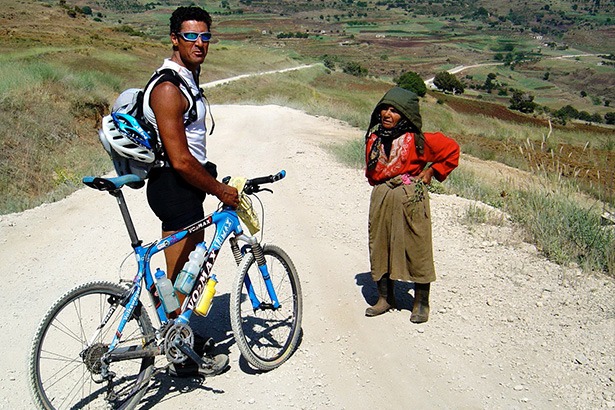 Lebanese sportsman Maxime Chaya’s achievements are many and despite already having ticked off most of the world’s toughest physical challenges and expeditions he’s still incredibly active. Having just completed the TSC New York City Marathon on 2 November for St Jude’s Children’s Hospital, Chaya ran the Beirut Marathon on 9 November for NGO Roads for Life, leading a group of ambassadors to the finish line. But for a man who’s climbed the highest peaks in the world, trekked to the poles and rowed an ocean, two marathons in one week don’t even faze him.

Sat in his Downtown office filled with endless rows of trophies and medals in the impressive Audi Plaza, the headquarters of Bank Audi for which he’s a corporate ambassador, Chaya, in full suit and tie, slowly works through autographing a pile of his book “Steep Dreams,” to send out to fellow adventurers. Published in 2009, the coffee table book is an account of his three years climbing the highest peaks on every continent as part of the Seven Summits Challenge. “My friends and family never thought I could make a career out of adventure and sports until I appeared on national stamps,” he jokes.

A huge poster covers the back of his office door, showing him planting the Lebanese flag on top of Mount Everest. You’d think after completing one of the world’s toughest physical challenges he wouldn’t be keen on returning, but for Chaya it’s a life’s passion. “When I came back from Everest to Lebanon the Prime Minister asked me if I’d do it again. I said that I’d love to, only this time from the other southern, Nepali side. He spent the next 15 minutes trying to convince me why I didn’t need to do it again,” he laughs.

Chaya was the first from the Middle East to walk from the Antarctic Coast to the South Pole in 2007, becoming the 16th person in history to complete the Three Poles Challenge and in August 2013 he beat the world record for rowing across the Indian Ocean (rowingtheindianocean.com) as part of a three-man team, traveling 6500 nautical miles in 57 days. With his adventures taking him all over the world, his many stories spill out of him. This is a man who love’s life and who’s expeditions are not only about extreme physical challenge, but seeing the world and meeting its people. At 53, despite having achieved most of the biggest accolades in the sporting world, he’s not planning on slowing down any time soon and has another challenge in the works. “I have something in mind. I can’t sit still anymore,” he says. “I’m still fit and I have lots of experience; I’m no longer young and no-one’s forcing me to do it but I love it.”

Chaya pauses between stories, jumping to his computer screen to show the early drafts of his upcoming book covering his journey across the Indian Ocean. “I usually keep diaries along the way. This one was more of a challenge, I couldn’t write as I went along because there was so much rowing and problem solving to do every day,” he says. Despite his adventures around the world, among some of the world’s most stunning landscapes, one experience that sticks in his mind is much closer to home. In 2008 Chaya cycled 470km from the far north of Lebanon, Qbaiyat, to Marjayoun in the south, along with British geologist and cycling enthusiast Steve Holyoak following the Lebanon Mountain Trail (LMT) over six days, staying overnight in small local guesthouses and powered by seasonal food from each region. “Lebanon is a fabulous place, we have amazing weather, four distinct seasons, sea, mountains, add to that the tabbouleh factor and the warmth of the people,” he says.

“You’re coming on a bicycle, you’re at their level; people open up to you”

His cycle along the LMT was not without adventure. “We got punctures galore along the way,” Chaya says, going on to say that at times the mountainous terrain proved too difficult to cycle along and the pair had to put their bikes on their backs and climb. “You have to be able to take hardship; to be able to get out of  your comfort zone,” he adds. There were a few wrong turnings along the way too, from heading off road and reaching a warning sign for land mines, to choosing the LMT trail “up an overhanging cliff face with only thorny bushes as handholds,” instead of the smooth tarmac trail up to Bcharreh. Adventurer Holyoak persuaded them to take the challenging route and “…30 minutes later saw us gripping our bikes between our teeth, hanging upside down from our toenails still 100 vertical meters from the top. After I clumsily sent a house-sized boulder crashing down to the base of the cliff we made the wise decision to retrace our path and take the more sensible route,” Holyoak reports in the blog of their journey (thethreepoles.com/blog/2008/07/12/lmtb-1-lebanese-mountain-trail-by-bike-part-1.)

“We met strange people along the way but I’m sure we looked equally strange to them too,” Chaya laughs. He points to a photo on his computer screen taken on the journey, with him towering over a tiny woman in traditional clothes, every bit a part of the landscape, staring up at him quizzically. From meeting a young boy that Hollyoak called the “kid with Mars Bars for toothpaste” to nuns in an overnight stay in a Kobayate convent; for Chaya the journey was not only about the beautiful landscapes but “meeting so many people from different backgrounds and religions, all who were very hospitable.” Traveling the country by bike is certainly more of an all-encompassing experience and Chaya found the humility of traveling by bike opened up the doors to connect with local communities. “You’re coming on a bicycle, you’re at their level; people open up to you, tell you their problems. You realize that everyone has their problems. We just have to find how to coexist in this Promised Land.”

The journey along the LMT for Chaya was also a way to “convey the true face of Lebanon; not what we see on the news all the time,” and an opportunity for him to discover rural areas and go deep to the root of the country’s diverse regions, its culture and its people. “It’s a wonderful way to really discover Lebanon. Like many of us Lebanese, I had never been to these places. Cycling is not like touring on a bus or by car; you get to experience the whole thing first hand, to talk eat and sleep with the people,” he says. “It’s a real taste of Lebanon through a sport you enjoy and you can indulge in vast quantities of food every day,” he says.

And with so many experiences and stories of food, people and landscapes creating vivid memories, Chaya is keen to repeat the adventure, this time from South to North.

The LMT is the longest hiking trail in Lebanon, crossing through 75 towns and villages. It showcases the beauty of the Lebanese countryside. The Lebanon Mountain Trail Association (LMTA) was founded to protect the LMT and organizes regular walks along the trail, also supporting sustainable tourism, organizing stays in local guesthouses and seasonal meals made by villagers using local produce.