Passionate cyclist and the founder of CyclingCircle, Karim Sokhn shares his reflections on the evolution of a thriving cycling community in Lebanon and his tips for the country’s best cycling spots

Over the past five years cycling has really picked up in Lebanon, alongside several well-known cycling groups. The community is growing rapidly,and cycling has become a popular trend. The largest cycling communities today are CyclingCircle, Bike Generation, Polyliban and The Bike Shop, Tripoli – each work on a different objective but with one mission:to promote cycling and empower the cycling community.

In addition to the bike tours that CyclingCircle organizes, the first bicycle delivery service in Lebanon and the Arab world, Deghri Messengers (70 048673, deghri.com, Facebook: Deghri Messengers), was initiated in September 2013. In addition, the country’s first bicycle festival, Baskil (Facebook: BaskilBeirut) was organized in April 2014, along with the first lobbying movement, Beirut Cyclehack (Facebook: BeirutCyclehack) in June 2014.

All the above projects and services aim at promoting the bicycle as a clean and healthy means of transportation, for recreation, commerce, sports and to prove that it is possible to bike in Lebanon.

As for biking tours, there are several regions that are really nice to discover by bicycle. For mountain bikers, Jezzine is the number one destination where easy and hard offroad trails can be found. The most strenuous trails are in the Bkassine Forest and at La Maison de La Foret, there’s a bicycle station that provides bicycles in the forest. Mount Kneisse with its breathtaking sceneries is also an awesome destination for a difficult level trail.

For road bikers and recreational cyclists, Beirut is the perfect starting place on a Sunday morning or a mid week night ride around Achrafieh, Gemayzeh, Downtown and Hamra. Beirut is charming at night and beautiful on a Sunday when there is less traffic. Another enjoyable route is the coastal road from Byblos to Batroun. The hard long uphill climb after Batroun village towards Saydet el Nourie is a must. A bicycle station in Byblos provides bicycles.

The Chouf district is my number one destination with amazing scenery and surroundings. One trail takes cyclists from Barouk to Maasser el Chouf, then passing through Khraibe and Mokhtara all the way to Jezzine. Another hard level, but amazing, trail starts at Faqra and ends at the Cedars in the North. Those able to do it will find nothing but pure adventure and satisfaction.

For many, cycling is much more than a leisurely pursuit or a gentler mode of transport; it’s a way of life. With a growing cycling community in the country, Lebanon Traveler speaks to two Lebanese cyclists passionate about the power of the bike

What got you into cycling in Lebanon?

I started as an amateur and used to rent a bike for easy rides along the northern coast between Byblos and Batroun and in the Chouf. In 2010, I volunteered for a non-competitive multi-sports events organized by the Association du PolyLiban, a Lebanese non-profit association working for the promotion of sports and culture through cycling as well as other activities in nature. PolyLiban’s objectives and spirit motivated me to buy my own bike and start doing longer rides with the aim of discovery, challenge, and the enjoyment of the Lebanese landscape.

What are some of the best regions in Lebanon to see by bike?

The Lebanese landscape offers different sceneries where we can enjoy cycling, from the coastline to the highest mountains and the Bekaa Valley; you can cycle on paved roads, dirt roads or technical pathways. Personally, I prefer to cycle in remote rural areas to benefit from the calm, where I can explore natural and cultural heritage while pedaling.

How can cycling help create positive societal change in Lebanon?

I became an active member of Polyliban in 2012. Cycling could be part of the solution for the transportation system in urban and sub-urban areas; it is contributing to rural and nature-orientated tourism activities and giving the opportunity to many Lebanese and foreigners to discover the country in a different way, appreciate its beauty and work for its conservation. 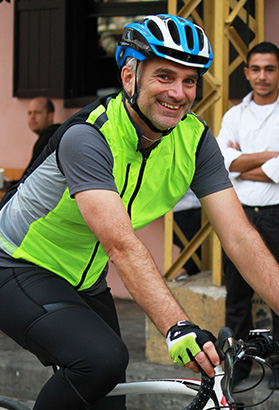 How long have you been cycling?

I’ve always cycled. I used to study in Paris and had a bike; every weekend I used to go outside Paris by bike and sometimes I would cycle around the Loire Valley and camp.

How often do you cycle?

I usually do a weekly cycle in Lebanon at the weekends. I like to climb so I usually cycle in the mountains where there is no traffic. I’ll cycle maybe 50km per ride in the Metn district, which is where I live.

Has the cycling community grown in Lebanon?

It’s definitely growing in Lebanon. I used to have a couple of friends to cycle with me, now I know at least 60 people. It’s really expanded over the past four years.

Is it a challenge cycling in Beirut?

I don’t cycle in Beirut much as it’s dangerous for everyone.

What do you enjoy about cycling?

I like the open air and it’s faster than walking. It’s exercise plus you have a bit of speed. It’s a way to enjoy the landscape or nature. Though I usually cycle the same main routes and know the landscapes well; once a year I try to travel and discover a new region by bike.

Would you commute to work by bike?

It’s not just a question of danger, it’s very hard. In summer, it’s out of the question because it’s too hot and within 15 minutes you’re completely soaked. In winter it’s the opposite – when it rains it really pours here. So there are only a few months where it’s comfortable to commute by bike, it’s not easy to do on a regular basis. I do commute by bike when I have the chance to.

The Bike Shop (06 202 393, Facebook: thebikeshoplb, Tripoli) is the place to buy, rent or repair if you’re based in North Lebanon. They also organize activities including city tours and races.

Cyclosport (01 446792, Gemmayzeh, cyclosportlb.com) was founded back in 1932 and sells bikes and accessories. They also organize bike rides.

Beirut By Bike (01 365524, beirutbybike.com, Downtown), with its central location, is the ideal spot to rent a bike and explore the city by day or night.

WHO TO CYCLE WITH

CyclingCircle (Facebook: CyclingCircleLB) is a dynamic community for recreational cyclists, established to encourage and promote safe bicycle riding. They also fix, sell and rent bicycles and organize rides in Lebanon.

PolyLiban (polyliban.org) was founded in 2008 when a group of cyclists in Lebanon organized a Polyathon to the Cedars. Now the group organizes a yearly Polyathon and a PolyLiban, along with numerous cycling tours and events.

Critical Mass Beirut (Facebook: CMBeirut) is a monthly event on the last Saturday of every month at 1pm at Martyr’s Square joining the global movement meet-ups happening at the same time all over the world.

4 Caves to Get Lost in