WHAT’S TRENDING ON LT
5 Ultimate Spring Road-Trip Destinations
10 Things to Do in Chouf
5 Things Foreigners Should Do in Lebanon
The History Behind Beaufort Castle
Beirut’s Mesmerizing MIM Museum
10 Photos That Will Make You Fall in...
Mini Guide to Chtaura
10 Things to Do in and Around Zahle
Lebanon’s Five UNESCO World Heritage Sites
5 Ultimate Tips for Your Next Camping Trip
Art, History & CultureBeirutExplore LebanonLT InterviewsLT LovesRegionsWhere to Go 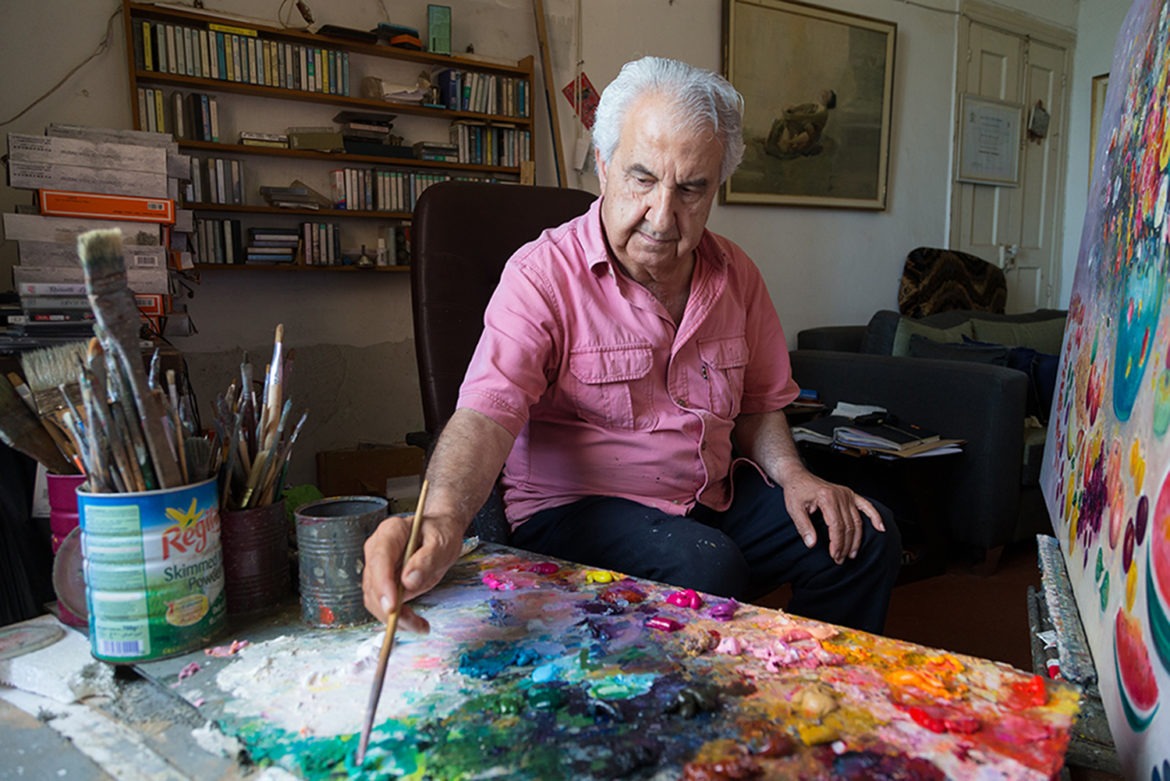 We meet painter Hassan Jouni at his studio in the atmospheric neighborhood of Manara. The Lebanese artist shares his nostalgia for “old Beirut” – a world he recreates in his paintings showing its architecture, cafés, people and warmth.

In the sleepy old neighborhood of Manara, Raouché, on a hill that slopes down to the sea, is a traditional old building that houses the studio of Lebanese artist Hassan Jouni. It faces a faded landmark to old Beirut – a black and white striped lighthouse now surrounded by high-rise buildings, cut off from the sea it once watched over.

Jouni’s paintings show nostalgia for the architecture, old cafés and traditional habits of Beirut in another era and Manara is a kind of microcosm for that changing world. The district straddles the past and present. It’s narrow streets maintain a village-like atmosphere, where neighbors share coffee and conversation. There are still some glorious villas of the past, such as the Rose House – an impressive dusty pink building with traditional arched windows and a balcony that stretches the full length of the house. Jouni’s paintings have a longing for a simpler time. His work is nostalgic for old Beirut, pitted against a modern world that many of Jouni’s generation have struggled to adjust to.

Graduating from the Lebanese Academy of Fine Arts in Beirut in 1964, Jouni finished his art studies in Madrid at the Royal Higher Academy of Fine Arts in San Fernando, before returning to Lebanon to teach at the Lebanese University where he headed the department of drawing and painting for 17 years. Since his retirement, Jouni’s career as an artist has continued to excel. So far he’s had almost 30 solo and collective exhibitions around the world, and is also a permanent feature in museums of the Middle East.

Inside Jouni’s studio, a shabby lounge has been transformed into an intimate exhibition room for his paintings, which hang from every wall, overlapping old windows and stacked against each other on the floor. His paintings vary in style and subject, from the expressionist pieces showing street scenes of old Beirut – flower sellers and colourful buses piled high with luggage and traditional cafes – to rural landscapes and fishermen pulling in their nets. There are also his paintings of human figures that capture the intense emotions of love, passion, pain and suffering. “I want to paint something that when people look at it they can see themselves. Everybody has a cross to bear. I consider my paintings self-portrait. They feature what every man and woman struggles with,” Jouni says, citing El Greco, Velázquez and Goya as three of his major influences.

Continuing onto the second room of the studio, it’s clear that Jouni finds his inspiration to paint here. His easel is centred around a window with an incredible sea view – its calming influence on this neighborhood is something Jouni tries to capture in his paintings. Scrawled all over the artist’s walls and doors are quotes of inspiration in Arabic script from poets such as Octavio Paz. There are photographs and paintings from his time in Madrid – a snapshot of the city from above, the waiter who used to serve his morning coffee. There are also shelves full of music cassette tapes, with handwritten labels including Mozart’s requiem – the soundtrack to which he listens while he works.

On the easel is a work in progress – a painting that shows what he calls “the last typical café of Beirut,” inspired by Ahwet El Ezez, an old glass café, in Gemmayzeh. “It was like a communion between the people sitting inside and the people passing outside. During that age, even if they didn’t know each other they felt like they did. They felt part of the same community.”

Jouni’s paintings lament the loss of this community in Beirut and they continue to show a warm world where Beirutis are connected to each other and the streets; where the houses of the city lean in towards each other in an embrace and winding staircases and open balconies link neighbors together. “In the old days, the architecture of the houses was as if they were kissing,” Jouni says. “Now the architecture is far away. It’s distant, cold. People before felt loved. Nowadays it’s all about hate and narcissism.”

Along with melancholy for a changing world – Jouni’s work is also about memory. The Beirut he sees is perhaps an idealized version, one that has been moulded from both his imagination and memories. “I paint out of nostalgia for the good old days of Beirut. You have a choice – either you live in the past, present or future. The present is even more frightening than the future. So whenever I am down or uncomfortable I go back to the town where I left my old self and feel good  when I find it.”

Jouni’s daily journey from his home near Khaldé to his studio allows him to stay connected to the outside world in Beirut from which he finds inspiration to paint. “The real museum is not a museum, it’s in the streets,” he notes. He comes to his studio everyday. It consumes him. It’s the place where he can return to the world of the past he longs for and share it with others. “Because I’m living near Beirut I’m in constant relation with it. I think that in the way I used to see it, the way I remember it, I am giving people the gift of sharing the view, the nostalgia, the dream.”

Take a tour of Raouché

Café Al Rawda (01 743348) is one of the area’s most atmospheric places to stop for a mint lemonade and pass the hours in its tranquil garden. For dinner eat at Casablanca (01 369334); a restaurant in a traditional villa with great sea views and an impeccable fusion menu.

Despite the changing face of Raouché, it remains one of Beirut’s most charming areas. Look out for the old lighthouse and admire the stunning Rose House, surrounded by regal palms. Explore the old fairground Luna Park, straight out of the ‘50s, and stop for a polaroid in front of the iconic Pigeon Rocks. Afterwards, visit Souffleur (01 365313), the museum of fisherman-turned-collector Ibrahim Najem. His collection includes over 30,000 pieces, from antique rifles to old diving suits.