Genuine and genius are two words that describe Georges Khabbaz perfectly. At just 40 years of age, the celebrated actor, writer, director and producer, has accomplished what many can only dream of. Elsa Yazbek Charabati takes time out backstage with George Khabbaz, where he talks about his latest play “Bel Kawalis.”

YOUR PARENTS WERE BOTH ACTORS. HOW DID THAT AFFECT YOUR DECISION TO PURSUE FILM AND THEATER?

It came genetically and in the air. Of course I took a lot from my parents, and the cultural atmosphere where I grew up had a great impact on me. My uncles from both sides were also musicians, as was my grandfather.

This artistic atmosphere surrounded me and I consider it a blessing. Moreover, my dad had a huge library so I grew up with music and books. It helped me discover my talent early and develop it.

YOU’VE DONE BOTH COMEDY AND DRAMATIC ACTING. DO YOU HAVE A PREFERENCE?

I like both, but frankly speaking, in our region and in Lebanon in particular, we need happiness and joy. It has become a rare currency, especially “clean” joy, far from insults, sexual or political vulgarity.

So I decided to go more into comedy, because through comedy we can also convey a patriotic, humanitarian, social message; a high level comedy built on real content. Anyway, I believe there is a thin line between drama and comedy.

WHY DO MOST OF YOUR COMEDIES END SADLY?

Actually, if you think of it, endings are always sad. The best parts are the beginnings. Endings are always about death or separation. You know, not all the ends of my plays are sad, but you can always find in them fear and preoccupation about what’s coming. I’m like this. I am anxious. I think life is not always fair.

DO YOU HAVE A FAVORITE PLAY OR FILM YOU’VE WRITTEN OR BEEN PART OF?

As a movie, I love “Ghadi” because it tells lots of stories and as a play, “Mich Mekhtelfin” that talks about a woman and a man from different religions who want to get married in a sectarian country. As for the series, I like one called “Abdo w Abdo” that I did for TV in 2003.

WHAT WAS IT LIKE TO WORK WITH PHILIPPE ARACTINGI IN “UNDER THE BOMBS”?

It was a very nice experience. The shooting took place in South Lebanon during the war and I learned a lot. First, I met the southern people and I witnessed very touching moments. I’ll never forget this real scene: a balcony half-blown by a bomb where a family was sitting for lunch.

It made realize that we, Lebanese, are real survivors. Going to the South for the shooting made me feel closer to other Lebanese that war had separated us from. It’s a nice movie; a scream against suffering and intolerance.

DO THEATER AND FILM MAKE YOU UNDERSTAND LEBANON DIFFERENTLY?

WHAT DID YOU DISCOVER ABOUT YOURSELF YOU DIDN’T KNOW?

Lots of things! I used to think my only source of inspiration was my parents, my family, my region, my religion, but I discovered that it’s far deeper than this. You end up deeper and armed with more faith. I’m a believer, and a Christian. I accept others as they are.

FOR THE LAST 13 YEARS, YOU HAVE PRODUCED, DIRECTED AND STARRED IN 14 PLAYS, EACH ATTENDED BY AN AUDIENCE OF MORE THAN 100,000. WHERE DO YOU DRAW YOUR INSPIRATION FROM?

Even though we’re playing “Bil Kawalis” right now, I’m already working on a new play. If the year had more than 12 months, I would have done even more: maybe three plays a year. We are a fertile ground for subjects and writing plays is not a job, it’s a need.

I need to write, in order to express my obsessions, my problems, and my struggles. What better therapy?

IS THERE A COMEDIAN OR AN ACTOR YOU’D LIKE TO WORK WITH?

Duraid Lahham. We would both like to be in a play together. Physically, we look alike. Perhaps we can play father and son roles. I think it will be nice. We’ve been thinking about it for a long time. 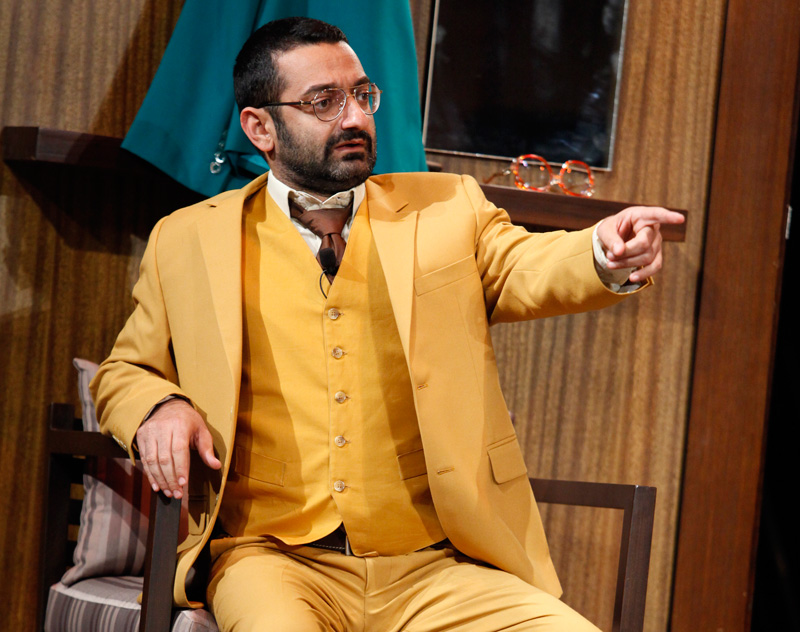 WHAT ARE YOU FAVORITE LEBANESE FILMS?

I like Nadine Labaki’s “Caramel” and Ziad Doueiri’s “West Beirut” and “Ghadi” because these movies have achieved the difficult challenge; being at the same time commercially popular and successful in international movie festivals.

ARE YOU WORKING ON ANYTHING NEW?

Yes, in September I’ll begin the shooting of my new movie with Gabriel Chamoun.

WILL IT BE THE SAME LEVEL AS “GHADI”?

Of course, always better, never going back. And I’m writing the next play and preparing the inauguration of a festival.

DO YOU HAVE ANY FAVORITE SPOTS IN LEBANON YOU WOULD RECOMMEND TO OUR READERS?

All of Lebanon is beautiful, but my birthplace is my favorite spot. When I go to Batroun, my heart beats differently. The sea has a great impact on me. I grew up by the sea and our house is one minute away from the beach. The sea, with its infinite horizon, is very important to me.

SO IT’S FROM HERE THAT YOUR INFINITE INSPIRATION COMES?

Definitely! I draw inspiration from Batroun’s infinite horizon. It is unique.

Three words? That’s so little for Lebanon! It’s like asking me to describe the woman of my life in three words! Well, Lebanon is a holy land, a spirit, a beautiful lady or a handsome man arousing jealousy.