WHAT’S TRENDING ON LT
5 Ultimate Spring Road-Trip Destinations
10 Things to Do in Chouf
5 Things Foreigners Should Do in Lebanon
The History Behind Beaufort Castle
Beirut’s Mesmerizing MIM Museum
10 Photos That Will Make You Fall in...
Mini Guide to Chtaura
10 Things to Do in and Around Zahle
Lebanon’s Five UNESCO World Heritage Sites
5 Ultimate Tips for Your Next Camping Trip
Art, History & CultureExplore LebanonLove LocalLT LovesRegionsSouth LebanonThings to doTraditional LebanonWhere to GoWhere to Shop 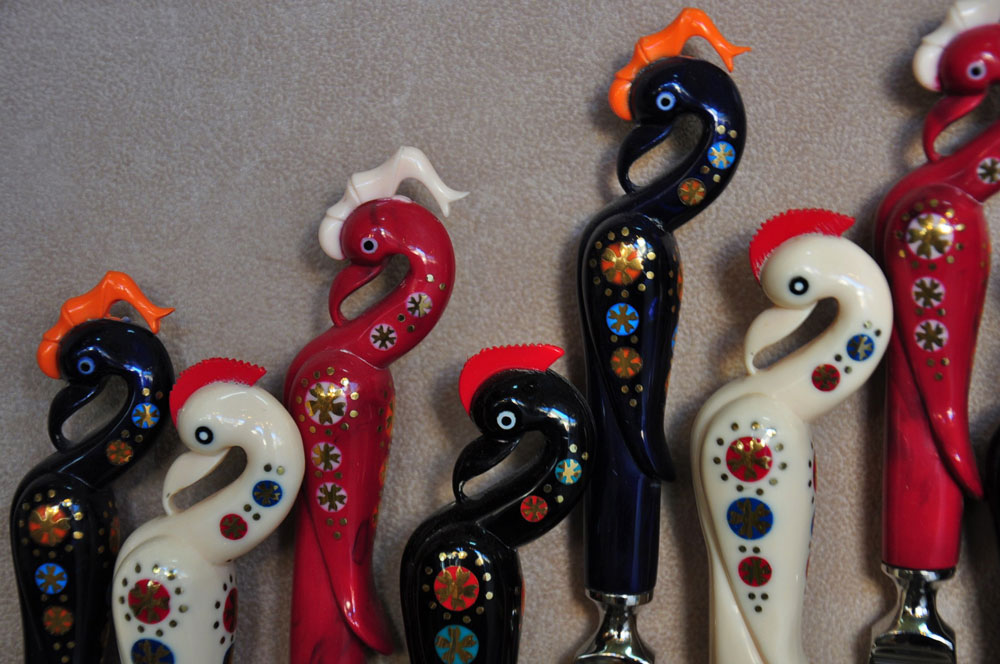 Developed from a heritage of blade-making that stretches back almost 250 years, by the Haddad family in Jezzine, the traditional cutlery adorned with intricately designed handles in the shape of a phoenix has become an emblematic craft of Lebanon

The history of blade-making in Jezzine dates back to 1770, when the Haddad family were forging daggers and swords. Always adapting with the times, the Haddads expanded to the production of rifles for the Lebanese army and then began the first manufacture of their now famous cutlery in 1930. Today, the company is called S & S Haddad, named after brothers Samir and Souheil and their product line includes bar, desk, dessert and manicure sets, small items such as bottle openers and key chains, and specialty pieces including daggers and swords. While Samir passed away a year ago and Souheil is now retired, the company remains a family business, run by cousins Tony (son of Samir) and Fouad (son of Souheil.)

According to Fouad, the distinctive handles are based on the Lebanese legend of the phoenix. A myth that can be traced back to Phoenician times, the phoenix – a firebird from paradise – lives 500 years, filling the air with its heavenly voice before perishing in fire. It then rises from the ashes to live another 500 years. This fabled bird resonates with Lebanon’s own history, from ancient times till today, a country that has shown its own resilience throughout years of occupation, war and regional conflict.

The success of the Haddad’s business inspired other families in town to follow suit, and Souk al Sad Street in Jezzine is now home to several cutlery shops. At Eid Bou Rached, the cutlery is produced following traditional methods, and shop owner Ghazi Bou Rached is happy to explain the process to visitors. Handles begin as cow bone and buffalo horn, which are then carved into the firebird’s head and body, polished and fitted with stainless steel utensils. Brass wings are added, and hand-painted details. Black and ivory are the traditional colors, reflecting the color of the base material.

“Our family started this business in 1925 and I inherited the shop from my father,” says Ghazi, pointing to an elderly man seated outside his shop. Like the phoenix, Haddad’s company continues to reinvent itself. In order to create a more durable product, the handles of Haddad’s cutlery are now made of a composite material. “We use bone powder that is mixed with cellulose acetate and poured into molds,” explains Fouad. “We have introduced new colors this way and variations in the design of the phoenix,” he says, pointing out different styles of head crests, beaks and wings on the handle. Some pieces are encrusted with brass and copper, others with mother of pearl. “We don’t change the phoenix itself though, because it’s the tradition.”

The craftsmanship of Haddad pieces is such that it garnered an article in National Geographic in 1958 about fourth-generation owner Said Haddad, followed by the issuance of a 1974 Lebanese stamp featuring Said Haddad at work. The Haddad workshop in Jezzine currently employs three craftsmen and they work with a charity to contract additional handicapped home-based craftspeople. Haddad pieces can be found in museums in Russia and Iran and have been gifted to dignitaries around the world.

Whether traditional cutlery hewn from horn or modern incarnations fashioned from composite materials, all pieces dazzle like the legendary firebird after which they are modeled. From key chains to 114-piece table sets, visitors to Jezzine are certain to find the perfect souvenir to immortalize their visit.

Jezzine’s famed waterfall cascades some 80m down a cliff at the edge of town. The best viewing spot is from Wadi Jezzine, just underneath the town. Visitors can also walk in the neighboring Bkassine pine forest. At a million m2 it is the largest pine forest in the Middle East.