How Cafe Younes Became a National Treasure - Lebanon Traveler
WHAT’S TRENDING ON LT
Download the Magazine
The Forgotten Cave of Saint George, Jounieh’s Hidden...
The Hidden Gems of Clemenceau
Stay at Beautiful Bkerzay
Discovering Maqam El Nabi Ayyoub in Niha
Discovering Al Haush Guesthouse
The Past and Present: 5 Photos from Mount...
A Look Inside Saydet El Mantara: Our Lady...
8 Things to do Before Winter Ends
Mini Guide to Tyre
20 Things to Do in Beirut
The Scents of Tripoli’s Public Garden & Spice...

The name is synonymous with Lebanese coffee culture, but how did it start? We take a trip back in time to tell the story of Café Younes. 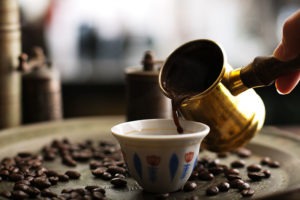 During the 19th century, like many other Lebanese, Amin Younes senior left his beloved homeland with fire in his soul and a dream in his heart. He set his sights on Brazil, which was experiencing a period of great progress thanks to the export of coffee.

Amin soon started learning the secrets of the coffee trade and spent the next 20 years working for Brazil’s coffee barons. Throughout this time though, he nurtured a dream: to open his own coffee business in the country he loved most, Lebanon.

In 1935 that dream came true. Amin launched his coffee business, which would later become one of Lebanon’s most inspiring stories. Café Younes’ first branch opened in Beirut’s vibrant Bab Idriss neighorhood. But things were not plain sailing. With the outbreak of World War Two, the Lebanese currency crashed, causing Amin to lose a major part of his life savings.

Despite his financial struggles, he remained focused on building a coffee empire, roasting and grinding on the premises and distributing his coffee throughout Lebanon. His perseverance paid off and by 1960, Café Younes opened in Hamra with one of the first espresso machines in the country. 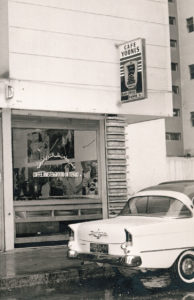 By this time Amin’s son, Souheil, had joined the business with his wife, making Café Younes a family affair. The couple went to trade fairs and roasters in Italy and Germany in search of the latest innovations, best products, identifying regional preferences for certain coffee roasts and mixes. They created blends named after the places they visited, such as the “Marjeouini Blend,” which, decades later, remains one of their most popular.

Souheil, like his father, was a self-made man who believed that hard work pays off. He made sure to instill this thirst for success into his son, and successor, Amin Younes Junior.

Once at the helm, Amin Junior knew that the Younes brand was mature enough for the next stage of expansion, taking Café Younes from the place that serves the best coffee in town, to one that also offers delicious food.

Today, the Café Younes brand is stronger than ever, serving coffee to the old and young with as much authenticity and passion as the very first day it started.

Why We Love Batroun Mountains Winery