WHAT’S TRENDING ON LT
Lebanon’s Five UNESCO World Heritage Sites
5 Ultimate Tips for Your Next Camping Trip
5 Places in West Bekaa Worth Visiting
Discovering the Beauty of the Cedars of God
La Datcha: Haven in Akoura
5 Things to Do in Akkar
Digging into Sidon’s History
Baalbeck: the ‘Sun City’
10 Things to Do in Anjar
Exploring Baskinta with Al Wadi Al Akhdar
Art, History & CultureBeirutExplore LebanonMuseumsRegionsThemesWhere to Go 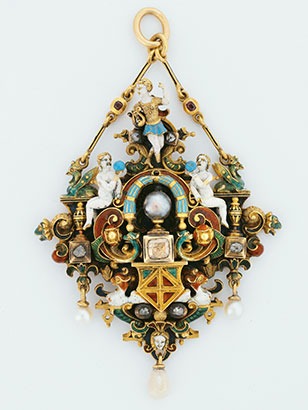 Explore the region’s past at the Robert Mouawad Private Museum through the impressive collection of obsessive collector, Henri Pharaon

The adhaan [call to prayer] sounding from a nearby mosque fills the Robert Mouawad Private Museum, a former private residence in Beirut’s Zokak El Blat district. With eyes closed, a pungent aroma of ancient cherry and cedar wood evokes the layered eras. The dark, cool, ornate interior of this museum is deeply immersed in regional history.

If it wasn’t for the late Lebanese politician and art collector Henri Philippe Pharaon’s love of horses, it’s possible the Robert Mouawad Private Museum would never have come into existence. According to literature found in the museum and articles written by academics, Pharaon, who died in 1993, at the age of 92, was a gentle soul who had a great attachment to the animal world, with both dogs and horses being a great love of his. “Neighbors would see him in his garden with his huge dog,” says Nasser Abu Khalil, one of the museum’s curators and guides.

Yet it was Pharaon’s love of horses that led to his infatuation with oriental interiors and fueled his collection of antiquities that can be seen today. His obsession for pure Arabian bloodstock [horses] – a collection itself, with over 300 horses making his the world’s biggest racing stable during the ‘50s and ‘60s – frequently took him to Syria, where he discovered the painted interiors of traditional Syrian houses. Following his father’s death, he began the seemingly arduous task of transplanting complete rooms of his Italian neo-gothic style house, now the museum, with painted woodwork, carved stone and marble from his travels in Syria.

The in-house collection of the villa, built in 1891 by Henry’s father, Philippe, is vast and diverse and includes everything from rare books, jewels, ceramics and architectural elements to pottery, ancient weapons, carpets and rare precious stones. They are the culmination of years of accumulation by “obsessive” collector Henri Philippe Pharaon and, of course, the jeweler and collector, Robert Mouawad himself.

According to an obituary in the UK newspaper, The Independent (August 10, 1993) by John Carswell, who at the time was a research associate at the School of Oriental and African Studies in London, the house termed a “gothic folly,” was inherited from his father and furnished entirely from British silversmiths, Mappin and Webb.  “[Pharaon] was fortunate to have the assistance of French mandate architect, Lucien Cavro. The result was spectacular,” states Carswell.

“Pharaon was, without doubt, the greatest collector in the Arab world and far ahead of his time”

In the obituary Carswell goes onto say that “The next step was to furnish it. This led to [Pharaon’s] continuous acquisition of the finest classical, Byzantine and early Christian antiquities available on the local market; and then to the formation of important collections of Islamic art and, perhaps surprisingly, Chinese porcelain from Syria. He was, without doubt, the greatest collector in the Arab world, and far ahead of his time.”

Carswell continued describing Pharaon’s house as “the constant rendezvous for every Lebanese politician, of whatever persuasion. He was exceedingly and traditionally rich; he virtually owned the port of Beirut and a leading bank. He was childishly amused that his postal address in Beirut was BP 1, appropriate for both these business enterprises.”

From villa to museum

In 1990, according to Abu Khalil, diamond collector Robert Mouawad, inheritor of the multinational jewelry company, Mouawad, purchased the villa and transformed it into a museum to house his own and Pharaon’s collection, both on display today. To all intents and purpose, the house remains as it once was. The intricately painted, carved wooden panels depicting Islamic scenes still adorn the walls and ceilings and the two floors are punctuated with stone and marble carvings, which include numerous ancient funerary steles, roman pillars, clocks, carpets, metal work, Chinese pottery and Islamic pottery, as well as Mouawad’s own collection of jewelry and precious stones. Altogether they create a magnificent time capsule of the distant past. “There is so much to see from different eras,” says Abu Khalil.

The museum’s vast collection of books, possibly the oldest and rarest in the capital, are particularly captivating, along with the decorative 19th century narguileh that line the dividing wall of the central, first floor landing. A grand exterior, set in expansive and beautiful gardens, also matches the ornate interior. Standing in the villa’s garden today, with the noise of thundering traffic rising from the nearby General Fouad Chehab highway, its former tranquility is hard to imagine. Yet, like the contents of this imposing villa, an air of mystery prevails.

A life of drama

A search on the Internet reveals a myriad of stories pertaining to Pharaon’s colorful life. The former foreign minister played a significant role in the formation of modern Lebanon, contributing to the fight for the country’s independence from France, and designed its flag of red and white with the cedar in center place. He was also a keen sportsman and Lebanon’s tennis champion of the 1920s.

In 1993, he met a grisly end at the grand age of 92, reportedly found stabbed to death in Beirut’s Carlton Hotel where he was then residing. His bodyguard and driver, Youssef Sorour met the same fate. Mystery still surrounds the death of the characterful Pharaon, with the identity of the attacker, who stabbed him multiple times, never being discovered.

By car Drive in a westerly direction from Tabaris along the General Fouad Chehab highway towards Hamra, taking the first exit right.

The museum is set on the highest point in front of the British Embassy.

On foot From Riad El Sohl Square, walk away from Downtown and up the hill, keeping the Grand Serail to your right. At the top, bear right and right again.

Soak up the atmosphere of the area where a number of churches and traditional houses can be seen. Cross the General Fouad Chehab highway into Zokak El Blat’s maze of streets to see, to some degree, how the area once looked during Pharaon’s time, with old palaces, a hamman, and former ambassador villas.

The well-known sweet shop, Al Bohsali first opened in 1870 in Martyrs’ Square by Saaddine Al Bohsali, along with his father Salim. The sweet shop has stood in Riad El Solh Square for 40 years, and is run by Amer M. Al Bohsali, serving a wide selection of Arabic sweets. It’s the perfect place to refuel on Arabic coffee and cakes.

After browsing the artisanal embroidery pieces for sale made by the workforce of widows, savor a homemade, Lebanese lunch of epic proportions. The villa’s pièce de résistance occurs each Friday in the form of a buffet consisting of the finest Lebanese cuisine.