WHAT’S TRENDING ON LT
5 Things to Do in Akkar
5 Ultimate Spring Road-Trip Destinations
10 Things to Do in Chouf
5 Things Foreigners Should Do in Lebanon
The History Behind Beaufort Castle
Beirut’s Mesmerizing MIM Museum
10 Photos That Will Make You Fall in...
Mini Guide to Chtaura
10 Things to Do in and Around Zahle
Lebanon’s Five UNESCO World Heritage Sites
Art, History & CultureBeirutExplore LebanonMuseumsRegionsThemesThings to doWhere to Go 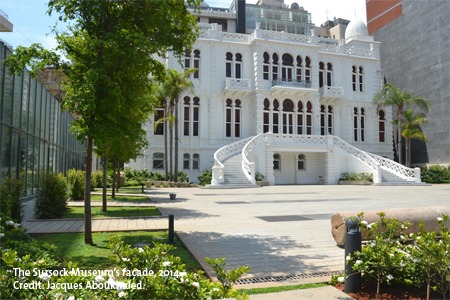 The Sursock Museum revives its vibrant past, reopening after a big budget restoration project that’s set to position it as one of the most serious art institutions in Lebanon.

From its regal white façade and elegant Arabesque windows, to its two staircases curving up to a grand entrance, everything about the Sursock Museum reflects the grand past of the area; a street still lined with mansions that once belonged to the Beirut gentry. When Nicolas Sursock, an aristocrat and art lover, died in 1952, his house was transformed into an art museum, in accordance with his will. The museum is part of a trust, handed over to the mutawalli, the president of the Municipal Council of Beirut, regardless of which political regime is in power. In 1961 Sursock’s former home opened its doors as a modern art and contemporary art museum and became an important platform for the work of local and international artists. Currently, the mutawalli of the museum is Dr. Bilal Hamad and the chair of the museum’s committee is Dr. Tarek Mitri.

Now hidden behind that grand façade – a typical example of 19th Century Levantine architecture, with Venetian and Ottoman influences, built in 1912 – is an impressive modern interior, with an additional four floors added, two of which are accessible to the public. The ambitious seven-year-long renovation and expansion project that cost between USD12-14 million has modernized the museum, adding to its exhibition space and technical facilities. Reawakening the museum’s glory days before the civil war, the renovation looks set to reassert the Sursock Museum’s presence on Beirut’s arts scene.

Under architects Michel Wilmotte and Jacques Abou Khaled, the building has been expanded to five times its former size, with an additional four floors added, though below ground level, to preserve the architectural heritage of the existing space. “I think the challenge was to add the contemporary building while preserving the old architecture, and making sure the transition between both is smooth,” says Zeina Arida, the museum’s director. “I find the result really successful. The architect succeeded in not doing that kind of rupture and, at the same time the added spaces are really contemporary.”

In the hall outside the museum’s lowest -2 level, a painting of Nicolas Sursock in a flamboyant purple suit by Dutch painterKees van Dongen, watches over the entrance to a vast stark white interior, an 800 square meter space with moveable walls, dedicated to hosting special exhibitions. Also added is a research library, a large state-of-the-art 164-seat auditorium to host talks, lectures, symposiums, panel discussions, as well as film screenings and performances, additional exhibition spaces on the ground floor, two storage spaces, technical spaces and a restoration workshop; as well as a shop and restaurant housed in a glass extension on the esplanade.

The renovations have expanded the museum’s potential; modernizing its technical facilities and allowing the permanent collection to be exhibited, while at the same time allowing the space for temporary exhibitions and a public program to help in appealing to new audiences. “It’s really well equipped. You have all the facilities needed to build a strong, complex program,” Arida says.

As with the architectural design of the building, the museum’s curatorial vision is to stay true to the core of its collection and expand upon it, along with making art accessible, educational and fun to as wide an audience as possible. “This institution is a very important one that started in 1961, when the museum opened. In the first 10-15 years the museum had a very important impact on artistic life and the practices of artists themselves,” Arida says. With the planning of the Sursock’s renovation, also came a reflection on the role of a museum in the 21st Century, Arida notes. “It’s really interesting to be able to think about this history and try to build on it; to really try to reflect on the past, whether the past of the museum or of our cultural and artistic landscape in Lebanon and the region, but also to fill the gaps,” she says. “It’s very challenging but for me it’s much more interesting than trying to create something from scratch.”

“It is really the role of a museum to develop educational tools and ways of making exhibitions more accessible. You have to create a rupture with what people might have as a pre-judgment for contemporary art, for example.” The Sursock Museum’s active public program, which includes screenings, workshops, artist talks, walks across the city, guided tours with curators, family program and panel discussions should help them to reach new audiences and help it become an important institution that will boost the cultural fabric of Beirut. “It’s a very exciting moment,” adds Arida.

With a tree-lined view onto the beautiful square in front of the Sursock Museum seen from its glass exterior, its café-restaurant Joanna’s Table will offer an eclectic range of Mediterranean dishes made from fresh seasonal ingredients. The menu takes its influence from Lebanon, Italy and Iran and offers traditional mezze with a twist. Committed to supporting local farmers with dishes made from local produce sourced directly from the farms, Joanna’s Table looks set to become a lunchtime destination itself.

After a trip to the museum, make sure to visit their shop which will sell a range of art books, critical texts and monographs related to art and museum studies. There will also be unique custom-made designer items and a range of souvenirs relating to the museum’s permanent collection and exhibitions.

Women of the Land