Snapchat Star: Georgio Bassil - Lebanon Traveler
WHAT’S TRENDING ON LT
Download the Magazine
Mini Guide To Hasbaya
The Past and Present: 5 Photos from Mount...
A Look Inside Saydet El Mantara: Our Lady...
8 Things to do Before Winter Ends
Mini Guide to Rachaya
Mini Guide to Kfour
The Hidden Gems of Clemenceau
Mini Guide to Ain Dara
Mini Guide to Marjeyoun
Mini Guide to Saida
20 Things to Do in Beirut

Georgio Bassil, a Lebanese architecture student, took a picture on Snapchat two years ago and drew a monster on it. Fast forward to September 2016, Georgio was awarded the Best Snapchat Artist of the Year Award at the Ghosties, a ceremony honoring the world’s most talented users. Georgio has been named one of the top Snapchatters worldwide by NY Magazine, Mashable, TechInsider, Buzzfeed, Glamour Magazine and more. We caught up with the man himself to learn more about his success.

What got you to start Snapchatting?

Two years ago, I became an avid user of Snapchat as it intrigued my creative side. Limited Snapchat drawing tools meant I had to be very imaginative!

So why the monsters?

I enjoyed creating monsters who follow me on my daily workout routines, in my studies, on my hikes, on my way to college… These monsters became my signature. I can always create a new and unique one for the next adventure!

What inspires you to keep Snapping? 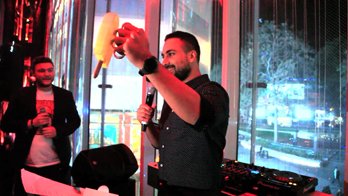 You are definitely the first Lebanese Snapchatter to go international. How does that feel?

So many people living in the US and Europe came to me after I won the awards and told me that I changed their view of Lebanon! I think this is something really huge after what’s happening around us.

What do you do when you aren’t Snapping?

I’m currently doing my master’s in interior architecture in USEK and I still have one semester left.

What do your parents think about your newfound Snapchat fame?

My parents have been my number one supporters from day one and they really believe that greater things are coming.