WHAT’S TRENDING ON LT
5 Things to Do in Akkar
5 Ultimate Spring Road-Trip Destinations
10 Things to Do in Chouf
5 Things Foreigners Should Do in Lebanon
The History Behind Beaufort Castle
Beirut’s Mesmerizing MIM Museum
10 Photos That Will Make You Fall in...
Mini Guide to Chtaura
10 Things to Do in and Around Zahle
Lebanon’s Five UNESCO World Heritage Sites
Art, History & CultureLT LovesNews & Editor's PicksThings to do 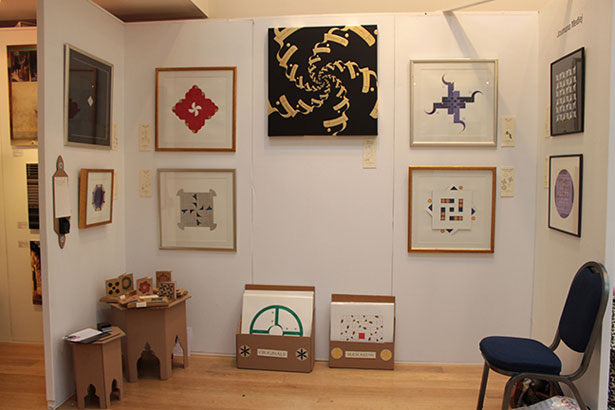 With her innovative designs, Joumana Medlej represents a modern and exciting development in the world of calligraphy. She delves back into calligraphy’s roots and pulls them into the future

Medlej spent years studying Kufi, the oldest calligraphic form of Arabic script, in an apprenticeship in Beirut with Samir

Sayegh, one of the most famous names in contemporary calligraphy. “He used to say to me ‘for the past 800 years nothing

new has happened in calligraphy, it’s just repeating old stuff’ and he has been trying to bring it back to life,” says Medlej.

Contrary to popular belief, calligraphy did not begin as the highly regulated art form that it is today, governed by Islam and

strict rules. It was Ibn Muqla, an early notable Persian official of the Abbasid Caliphate dynasty and notable calligrapher

circa 900AD, who created the rules that determined calligraphy, as we now know it. “The rules came much later; there were

300 years of just experimenting with the form. The freedom and creativity was incredible,” says Medlej. Sayegh encourages

calligraphers once had. Studying under him is a vastly different experience than under more traditional calligraphers that

often take a more rule-based approach. The study of calligraphy often translates to following and mastering the traditional

method which Medlej describes as “patient imitation…you just repeat old forms forever and ever, there is not room for

much creativity in the traditional approach.”

Medlej has certainly adopted the contemporary approach of embracing the letter and trying to understand it. She doesn’t

have a form or style, “in each piece the script invents itself,” and while she uses a traditional medium and Arabic letters she

itself designed to appeal to the eye and speak to you on another level, rather than just existing as a functional

Yet, despite being one of the brightest names in the Lebanese calligraphy scene, Medlej left Beirut for London a year ago.

“There isn’t a big market for it in Lebanon,” she says. “There is also a lack of resources. I can’t find the materials I need

[in Beirut], it’s just a complete dead end.” Medlej feels there is more potential and appreciation for her work in the West.

“There is a real interest for Arabic calligraphy in London,” she says, noting the irony and tragedy in the lack of support

within the art form’s regional origins. In Cairo, the interest in calligraphy is greater than in Lebanon, Islamic calligraphy

can be studied at the American University of Cairo, though it’s taught through the lens of traditional Islamic calligraphy.

For Medlej, who is working on an evolution of the form, this is not an option; “you are breaking a tradition. It is [considered]

borderline blasphemous. You run into trouble if you do something new.” Medlej is about to begin teaching a calligraphy

course at The Arab British Centre in London, which promotes Arab arts and culture in Britain. In keeping with her work, the

course will encourage the participants to look to the roots of calligraphy. Her method is her own, born of years of experience

as a calligrapher and her own extensive research. While the interest in Medlej’s work is growing in London, there are only a

handful of calligraphers working on its contemporary form in Lebanon, leaving the future for this ancient art uncertain.

As digital culture evolves, along with the field of graphic design, Arabic typography – the art of designing letters to be used in print – has flourished over the last decade. Lebanese type designer, Nadine Chahine is something of a pioneer within Arabic typography. She has had a considerable output in the field, creating the award winning Gebran2005 typeface. It’s named after Gebran Tueni, the former editor and publisher of the Lebanese newspaper, An-Nahar. Gebran2005 is a modern version of a classic, newspaper headline style. Chahine described the typeface as having a “distinctive, self-assured presence, just like Gebran.”