WHAT’S TRENDING ON LT
Discovering the Beauty of the Cedars of God
5 Places in West Bekaa Worth Visiting
Lebanon’s Five UNESCO World Heritage Sites
La Datcha: Haven in Akoura
5 Things to Do in Akkar
Digging into Sidon’s History
Baalbeck: the ‘Sun City’
10 Things to Do in Anjar
Exploring Baskinta with Al Wadi Al Akhdar
Villa Chamoun Guesthouse, a Retro Revival in Hasroun
By PlaceForest & Nature ReservesSustainableSustainable TourismWhat to DoWhere to Go

Pioneering researchers and academics in the field of biodiversity in Lebanon, husband and wife duo, Georges and Henriette Tohmé are on a life-long journey to document the flora and fauna of Lebanon

Inside a 1950s Achrafieh apartment block, Georges and Henriette Tohmé sip on Arabic coffee with a pile of botany and wildlife books surrounding them. The long-married couple have dedicated their lives to the study of nature in Lebanon and pioneered documentation and research in the field. Perhaps unusually, they have built their careers together; from documenting plant specimens in the field to co-authoring books that have covered everything from the flora of Lebanon to ants and birds – with Henriette hand sketching the accompanying illustrations.

Georges started working in botany in 1959 when the study of Lebanon’s unique ecosystems barely existed. It was a field of research that him and his wife pioneered and now most of the professors of biology in Lebanon’s universities are their ex-students. “We were the first to document Lebanon’s wildlife,” Georges says. “Nobody had spoken about biodiversity here. Henriette and me wrote many books on the ecology of Lebanon, studying the influence of temperature, rainfall and other factors.”

Henriette brings out the couple’s life’s work, an extensive flower and plant encyclopedia. “Illustrated Flora of Lebanon,” released at the end of 2013, documents Lebanon’s rich and varied biodiversity in plants and flowers. Their second edition, it is the work of years of painstaking research in the field, hunting for flowers and plants all around the country, once thought extinct.

In total, the Tohmé’s have identified 2,612 plant and flower species, with 108 unique to Lebanon, including the plant, Salvia Peyronii, first discovered in Lebanon 200 years ago, but long thought disappeared. “For such a small country Lebanon is rich in biodiversity,” Georges says. “Within one-and-a-half hours from the sea to the mountains you pass through six different eco systems.” Henriette continues, “There is a big variety of plants here because there are a big variety of biotopes; the beach, the lower mountains, upper mountains, high peaks, the valleys and the Bekaa Valley which is very unique for plant species.”

Georges and Henriette bring out book after book from their extensive library; they know every botanist who has ever studied the ecology of Lebanon by heart, from a Russian studying Arabic in Beirut back in 1896, who wrote “Beirut and Mount Lebanon at the first step of the 19th century,” to the English botanist P.H. Davis, of whose discoveries in the book “Flora of Turkey” on the Syrian side of the Anti-Lebanon mountains they were pleased to uncover for the first time in Lebanon.

They are also early environmentalists who pioneered the discussion about protection of natural habitats before it became a hot topic. “On 5 June 1973, I proposed the first natural reserve in Lebanon on the Palm Islands of Tripoli,” says Georges. “It was an international meeting for towns on the Mediterranean sea to help protect [the habitats of] migrating birds. The president of the Lebanese Republic at the time was so interested he told the police not to let anyone on these islands with a gun to hunt anymore. Everyone was in disbelief,” he laughs. In ’74 Georges wrote a study on how to prepare the Chouf Cedars as a natural reserve. Henriette likewise made one on Ehden, Tannourine and later in Tyre, all of which have now become protected areas.

For Georges and Henriette passing their knowledge on to the next generation has always been essential. “We are biologists from the beginning but have always been teachers,” Henriette says. “We want to give what we know to the younger generation and we learn very much from them.”

Though Georges retired 20 years ago, the couple are both still active in the field and their work is never done. While many species of plants disappear, new ones sometimes appear in the most unexpected places. Not long after their book “Illustrated Flora of Lebanon,” came out, the couple discovered a new species of flower, growing out of the wall of the American University of Science and Technology (AUST), just around the corner from their home, after they had searched for its existence all over the Lebanese countryside. A sign perhaps that their work will never end.

THE WILD FLOWERS OF LEBANON

Native to the mountain region of Lebanon, at 750-1400m, the Lebanon cyclamen has peppery-smelling flowers that turn from white to pale pink. 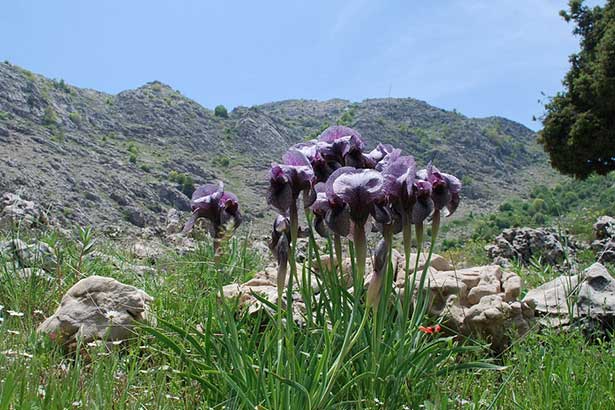 A unique plant species found only in the high-altitude mountains of Lebanon, in danger of extinction from unsustainable agriculture and picking by locals and plant traders.

Often confused with the Papaver Rhoeas, corn poppy, common in Europe, this flower, otherwise known as the semitic poppy, is unique to Lebanon and Palestine.