Beirut is a city that demands constant examination. It is a hectic, crowded, nostalgic, and beautiful place that has played muse to artists for many centuries. It was in this inspiring and frustrating environment that Haven for Artists was born.

Haven for Artists is a collective of musicians, poets, filmmakers, and visual artists who have come together to form a non-profit dedicated to supporting underground artists in Lebanon. “It is a space where artists can grow, learn from each other, and collaborate to push themselves and their art forward,” says Dayna Ash, creative director and co-founder of Haven for Artists.

As its name suggests, Haven for Artists has established itself as refuge for artists seeking a like-minded and passionate community that unapologetically diverges from mainstream culture. “We wanted to create a society outside of society… and throw the events that nobody else would throw.” Their determination to inspire and support artists has earned them a position as a leader in Beirut’s growing underground art scene.

Going to one of their many events, it’s hard to imagine that the group started almost by accident. Dayna explains that there were many art enthusiasts and people interested in the underground scene that didn’t have a space to convene. That’s when she and her co-founder Alia Samman decided to gather in a centralized spot to give themselves a platform to perform. “We started doing [performances] in a bar. It was tiny; it only fit 30 people. Then it grew to galleries. Then we started getting big spaces… And then we started throwing festivals.” 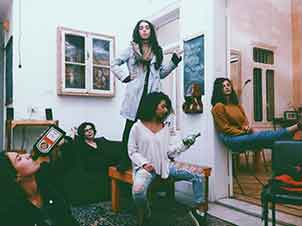 Haven for Artists has grown substantially from its modest beginnings. It now holds an art residency, hosts a music festival, and owns a space in Mar Mikhael, where they regularly host workshops and events. The group is currently working with March Lebanon on a project called Tracks of Time, that will bring together international and Lebanese artists to make space for international exchange.

Though Dayna insists that the group is simply artists getting together and playing, it is clear that Haven for Artists has caught onto something new, refreshing and beautiful that will uphold the legacy of Beirut as city for artists.