WHAT’S TRENDING ON LT
5 Ultimate Spring Road-Trip Destinations
10 Things to Do in Chouf
5 Things Foreigners Should Do in Lebanon
The History Behind Beaufort Castle
Beirut’s Mesmerizing MIM Museum
10 Photos That Will Make You Fall in...
Mini Guide to Chtaura
10 Things to Do in and Around Zahle
Lebanon’s Five UNESCO World Heritage Sites
5 Ultimate Tips for Your Next Camping Trip
Art, History & CultureLT LovesNews & Editor's PicksThings to doThings We Love 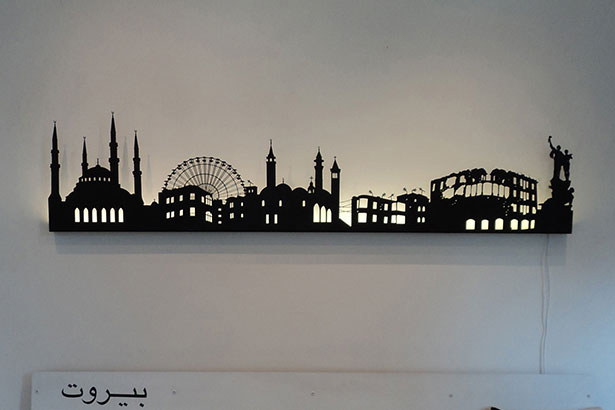 are busy recording the changing landscape of Beirut on film or with paint, one man is demonstrating

a unique talent with a series of metal installations of urban sites ravaged by a civil war.

he was never really satisfied with its limitations to print or digital artworks. “I also felt an absence of the tremendously

rich Arabic design culture in its programs, which is a field have a particular interest in,” he says.

After working in Orient 499, an artisan boutique in Beirut, which offers bespoke Middle Eastern handicrafts, he became

interested in object making. Working on the store’s visual merchandising and displays really sparked his imagination.

playground I identified with. It was the right place.”

of urbanization. He laments the lack of vision shown by developers, but, it also gave him inspiration to design a

series of metal installations. Most are replicas of actual facades of old buildings in Beirut, biding their time until the

wrecking ball hits. Some of his murals are accurate reproductions while others are dramatized.

investors with terrible development plans gave me the urge to document them in a picturesque way.”

He believes that every dilapidated building has a story to tell, a tale of bygone Beirut, an ancient city where

cobbled streets were lined with beautiful ornate buildings. “Beirut, with its new urban jumble, has a lot of its collective

memory erased. These murals try as much as they can to fictionally preserve landmarks that hold too much memory,

for a lot of people.” His material of choice is metal because “it ages beautifully. It is also a very flexible material which offers

so many options to work with.” Apart from these stunning installations Abdallah has also created a unique range

of mirrors, as well as painted dresses and shirts inspired by the ancient talismanic robes custom made for high ranking

figures in the Ottoman Empire. “They used to be worn as protection against the evil eye and were inscribed with

sophisticated calligraphy, Koran verses and astronomical calculations. I reinterpreted them in a more fun and simplified

way using Sufi poems of Al Hallaj instead of the verses…” Apart from being utterly gorgeous, they are a truly modern take

at Orient 499 in Clemenceau, Beirut.