WHAT’S TRENDING ON LT
5 Ultimate Spring Road-Trip Destinations
10 Things to Do in Chouf
5 Things Foreigners Should Do in Lebanon
The History Behind Beaufort Castle
Beirut’s Mesmerizing MIM Museum
10 Photos That Will Make You Fall in...
Mini Guide to Chtaura
10 Things to Do in and Around Zahle
Lebanon’s Five UNESCO World Heritage Sites
5 Ultimate Tips for Your Next Camping Trip
Forests & Nature ReservesMount LebanonRegionsSouth LebanonSustainable TourismThemesWhere to Go 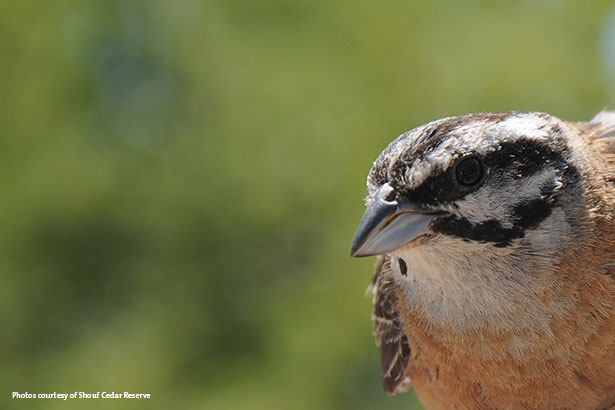 As an essential stop on the route of migrating birds, Lebanon has an important role in their conservation. Environmental Awareness Coordinator at the Shouf Biosphere Reserve, Mirna Riman explores.

Throughout the year Lebanon has a diverse population of visiting and endemic birds. The country lies on one of the highest diversity zones in the world, meaning its importance can’t be underestimated. It is a huge bottleneck for migratory birds between Europe and Africa and classified as the second most important migratory corridor after Cuba, the major path between Latin and North America. Knowledge and information gleaned from neighboring countries also stresses the importance of this country in the soaring birds’ migration systems.

The Al Shouf Cedar Nature Reserve was designated as an Important Bird Area (IBA), by Birdlife International in 1994, among the world’s key sites for the conservation of biodiversity. It’s considered a major flyway route for thousands of birds twice a year, where migration takes place between Europe and Asia to Africa in autumn and the reverse route for breeding during the spring season. Birds depend on resting, feeding and roosting hotspots during their migration in order to secure food, water and habitat. This is why protecting these important habitats and conserving them is so important.

Although soaring birds may seem large in number when passing along bottlenecks, these might actually be the only group of these birds worldwide, so hunting them might cause their extinction, as Bassima Khatib, assistant manager in the Society for the Protection of Nature in Lebanon (SPNL), states.

The Reserve hosts 290 species of birds, 32 species of wild mammals and 532 species of plants. 19 out of the 290 bird species are considered rare at national level and more than 22 species have been confirmed as resident; the remaining are migratory or rare visitors, which designate it as a significant staging, resting or feeding post for migrating birds. There are around six globally threatened species recorded in the site.

Many species of birds have been documented as breeding in Lebanon and some are high elevation species such as the Chukar Partridge, Eurasian Jay, Coal Tit, Horned Lark and Rock Bunting. Other birds nesting might include the Great Tit, Woodlark, Eastern Orphean Warbler and Eurasian Blackbird. The migratory birds in the reserve include the Greater Spotted Eagle, Eastern Imperial Eagle, Saker Falcon, Egyptian Vulture and Lesser Kestrel.

Al Shouf Cedar Nature Reserve is located in one of the world’s most important corridors for bird migration, yet every year recreational hunters, who are either unaware of or indifferent to the country’s poorly enforced hunting ban, kill many birds along the route.

“Most of the hunters don’t know the species very well,” says Nizar Hani, manager of the Al Shouf Cedar Nature Reserve. “And here in Lebanon there’s no monitoring, except at the reserve, which is [only] five percent of the country’s landmass. It’s big, but it’s not big enough.”

He considers that most people in Lebanon do believe that wildlife should be preserved, but with contradiction as “they still hunt.”

Bird migration is globally considered as one of the wonders of the natural world in which over 600 million birds pass over Lebanon twice a year. “Hunting in Lebanon is destructive, especially under a long-term ban with no application of decrees or enforcement of laws. Many birds are in decline in Lebanon. These are not limited to threatened species but also cover many common bird species,” says Ghassan Jaradi, professor of ornithology at the Lebanese University, who began studying Lebanon’s bird populations in the early 1990s. He adds that migratory birds also benefit the country as when the birds rest on land they eat rodents that feed on the local plants and seeds, acting as a natural pesticide to protect crops.

Environmentalists, hunters and even gun sellers – who sell hunting rifles legally despite the hunting ban, are all in favor of implementing the law to regulate hunting. A 2004 law introduced hunting regulations, including permitting the hunting of game species, but was never activated after being ratified by Parliament.“We are privileged to be in Lebanon, [a country] that is considered to be a bottleneck for migrating birds that pass over it,” Dalia Jawhari says, a passionate bird expert and the program director in SPNL, “that’s why we should conserve and protect these birds, not hunt them.”

The Al Shouf Cedar Nature Reserve is working on raising awareness for hunters and the younger generation, about the hunting law (2004) to regulate hunting in close cooperation with the Ministry of Environment (MOE) and the Migratory Soaring Birds Project (MSB). In addition, the reserve will soon launch a bird watching program as an ecotourism activity with guided bird tours to generate  business . In the USA, the annual economic value generated by bird watchers is about USD32 billion per year and around USD5.45 million in Jordan and Lebanon; though it has the potential to yield USD 14.3 million per year for bird watching of migratory soaring birds.

In 2014, “HAPPY BIRDAY” organized by JABALNA Association in cooperation with the Ministry of Environment and the Shouf Cedar Nature Reserve traveled all around Lebanon to various traditional festivals to promote awareness for the wild birds of Lebanon and create a friendly interaction between birds and visitors.

• The lake and Ain El Lejee of the

the eastern side of the mountain

A field guide specialized in birds will take you on a tour. Bring a pair of binoculars and camera to catch memorable scenes.

Stay overnight in one of the atmospheric rooms of Arc En Ciel’s Beit el Hana, a beautifully refurbished traditional building or stay in the neighboring St. Michel hostel, both in the village of Maaser El Shouf.