WHAT’S TRENDING ON LT
5 Things to Do in Akkar
5 Ultimate Spring Road-Trip Destinations
10 Things to Do in Chouf
5 Things Foreigners Should Do in Lebanon
The History Behind Beaufort Castle
Beirut’s Mesmerizing MIM Museum
10 Photos That Will Make You Fall in...
Mini Guide to Chtaura
10 Things to Do in and Around Zahle
Lebanon’s Five UNESCO World Heritage Sites
Explore LebanonMount LebanonRegionsWhere to Go 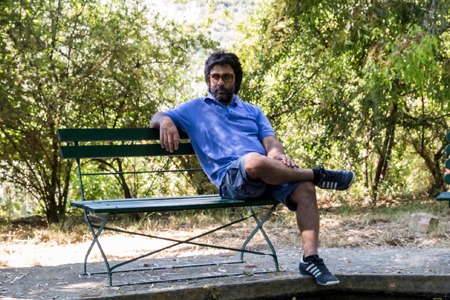 LT meets prolific underground music producer Zeid Hamdan in his family village of Bater – and discovers the serene surroundings that have provided the space for him to create music.

Musician and producer Zeid Hamdan opens the grand rusted gates to his family home located in Bater, the last village in the Shouf region. Located 10km before the South’s Jezzine, the sleepy Druze village, surrounded by olive groves and fruit trees, has deep agricultural roots.

Hamdan is well known within the regional alternative music scene; he formed cult indie electro-pop band Soap Kills in the late ‘90s with Yasmine Hamdan and started a new wave of Arabic indie music. Active over two decades, Hamdan has since founded numerous innovative musical projects from The New Government to Zeid & the Wings and as producer has helped emerging artists form their sound. One article in CNN named him one of eight leading lights in Lebanese culture.

With family roots in Yemen, Iraq and Aleppo, Hamdan’s family home in Bater was built around 370 years ago. A typically Lebanese stone house with arched dome ceilings and Arabesque windows, it’s a tranquil escape, surrounded by a large garden full of ancient fruit-baring trees. At the entrance of the house is a pond with a fountain of fresh spring water; once the center of the village and its water source. After a 1956 earthquake destroyed all the buildings that surrounded it, Hamdan’s grandfather bought the land to extend the family home and created a garden.

Hamdan’s great grandfather, and his father before him were religious leaders within the Druze community. His grandfather was the first in the family to move to the city of Beirut where he worked as the head judge for criminal affairs, though he maintained a connection to the area. “The villagers know my grandfather very well. He was very generous and was respected and loved. He donated land so the community could build a kind of cultural center,” Hamdan says, pointing to a large structure among the trees.

Hamdan still remembers when the house was surrounded by cornfields; but it was only upon returning from Europe after the war that his family rediscovered the house. “I was a teenager and I was starting music, and this became the house where I explored with musicians, the house where I hid,” Hamdan says. “It’s my hidden little paradise until today; a secret place where I bring my really close friends. It’s not an open house that sees a lot of life. Every time I come here, I have the impression of intruding upon a moment of time.”

And though the house today spends much of its time in hibernation, its silence has provided the space for Hamdan to write music over the years. Soap Kills first 2001 EP was named “Bater” after the village. “A lot of songs were written here,” Hamdan says. “When you’re a teenager in your twenties you like the drama. I would lock myself up in this home and talk to the ghosts.” It’s a practice he’s continued with the artists he works with today. “It’s so big, everyone can isolate themselves and empty their head. It’s very rare to find a place in Lebanon where you don’t hear the sound of the motor.”

In the summer, though, the house comes to life again; a playground for the kids of his brothers and sisters when they return from abroad and Hamdan’s own two year-old son. “In the summer my parents do big parties here, picnics during the day. Everywhere becomes filled with tables and a lot of food. It’s the spirit of before.”

Close by to Bater is Niha Fortress, an ancient fort carved into the rock, that dates back to at least 975 AD, the hiding place of kings such as Emir Fakhr Al Din II who reportedly fled there from the Ottomans and took refuge for a year before he was eventually found and killed. “It is a place you can go that is off the tracks of the tourists; every time I went there I was alone,” Hamdan says. “I would always go on my own and feel the same vibe as this house.”

Another site that Hamdan has always returned to are some old Roman ruins in the valley that his house looks down upon. “They are completely unnoticed and unmarked; I always ask the locals and they say it was an old temple of Cleopatra for the summer. I love walking down there; It’s a part of Lebanon that is somehow untouched. It’s green, it’s clean, the architecture is still preserved.”

Hamdan has just released the EP “Balekeh,” with songs that range from subjects such as indifference – written at the beginning of the Syrian war – to Lebanese politics and mid-life crisis. “You are in a certain kind of comfort, but you are lazy for your dreams, you lose the breath for your dreams, and feel a kind of panic and depression. There is a mantra inside the chorus – don’t let your dreams be kidnapped, keep the breath, keep the energy.”

And Hamdan has certainly done that; a second part of the EP is due out soon in English and a new EP with Egyptian singer Maii Waleed and an album with Maryam Saleh, also from Egypt, are due out on Eka on the 17 September.

Make the Shouf your base for the weekend and explore the area. Stay overnight at Bouyouti (03 310200, bouyouti.com) for the refined guesthouse or Deir Al Oumara

Bater’s Garden (78 940555, Bater.Garden) is one of the few restaurants in the small village of Bater, serving up fresh and seasonal local food. The nearby Chafik Merchad Guesthouse – Niha (05 330755) can prepare delicious local cuisine made by local villagers, but call ahead.

It’s only a short drive to Niha, the birthplace of legendary Lebanese singer Wadih el Safi and home to a site thought to be the tomb of the prophet Job. The Fortress (Entrance LL 7,000) offers breathtaking views and the small Shouf Biosphere Reserve info center sells local produce such as olive oil, jam and pickles. The village itself is worth an exploration with its traditional houses, two ancient churches and old water mill.