WHAT’S TRENDING ON LT
5 Ultimate Spring Road-Trip Destinations
10 Things to Do in Chouf
5 Things Foreigners Should Do in Lebanon
The History Behind Beaufort Castle
Beirut’s Mesmerizing MIM Museum
10 Photos That Will Make You Fall in...
Mini Guide to Chtaura
10 Things to Do in and Around Zahle
Lebanon’s Five UNESCO World Heritage Sites
5 Ultimate Tips for Your Next Camping Trip
Explore LebanonLT LovesMount LebanonRegionsReligious SitesThemesThings to doTraditional LebanonWhere to Go 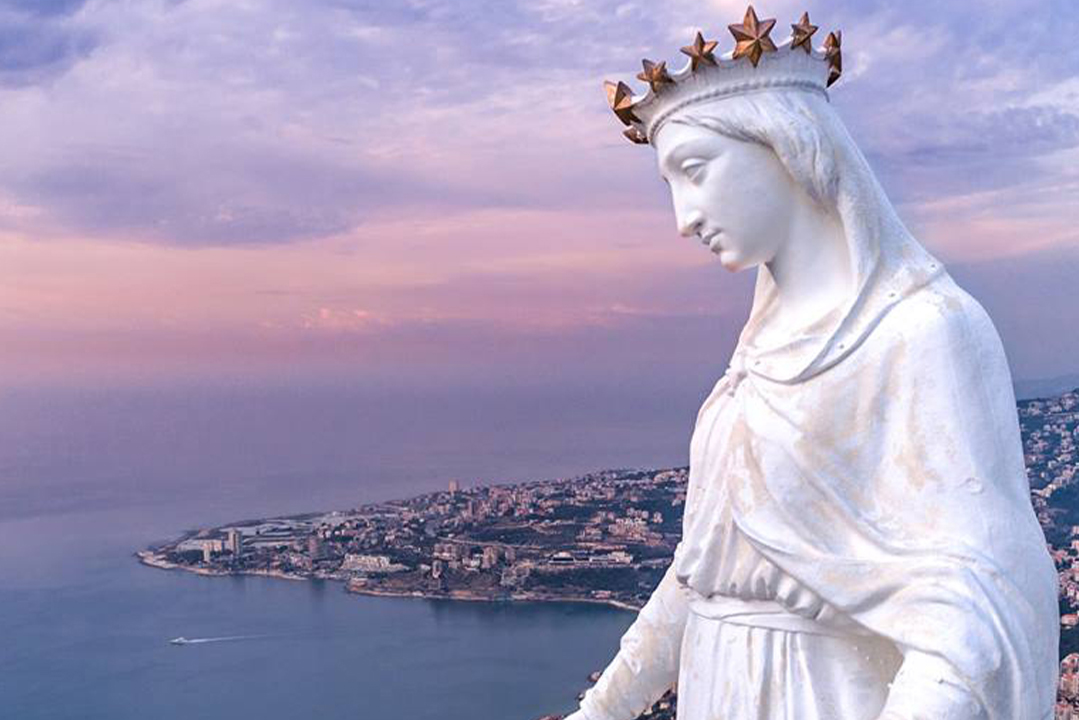 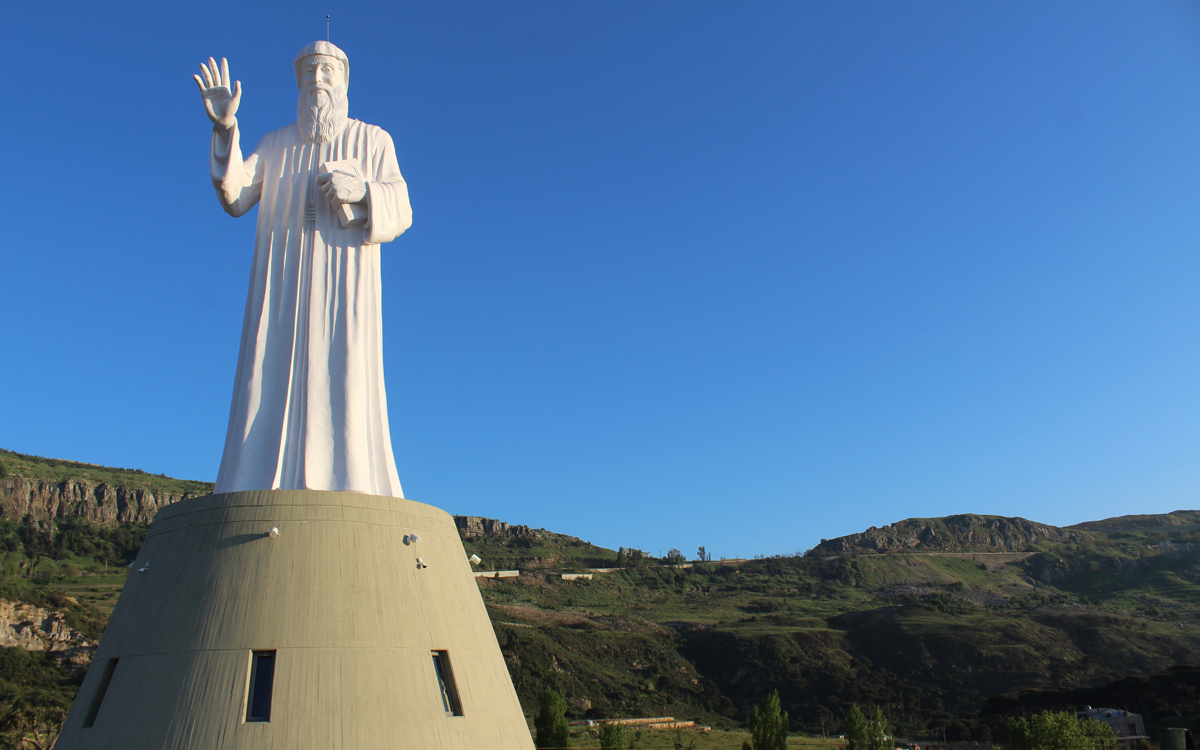 Total height: 17.5m (including 10m base)
The Saint Charbel statue in Hammana overlooks the Lamartine Valley and some of Mount Lebanon’s most beautiful villages. It dominates the landscape and can be seen from miles away. The incredible structure was financed by
engineer Charles Barmaki and created by artist Tony Awad. It was transferred from Mar Moussa to Hammana and placed on top of a small church, where it currently stands surrounded by pretty gardens and walkways.

In 2018, Cardinal Rahi, the Patriarch of the Maronite Church, celebrated the inauguration of the statue in the presence of thousands of people. Today, the site is an important place of pilgrimage and hosts religious ceremonies.

How to get there
Hammana is located 26km east of Beirut at an altitude of 1,200m above sea level. You can reach the site by taking the Beirut-Damascus International Highway through Aley and Sofar. It is also possible to take the Metn Express Highway through Dhour Choueir, Mtein and Falougha. 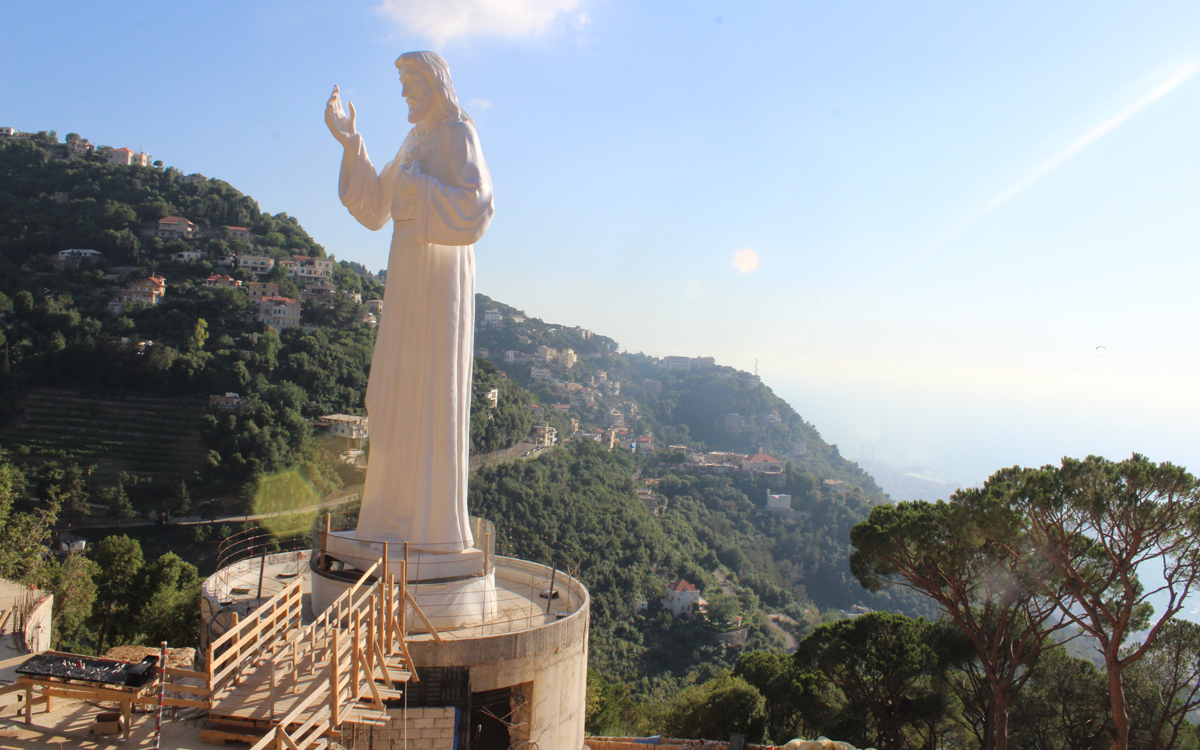 Total height: 22m (including 10m base)
Lebanon’s tallest statue of Jesus Christ forms part of the Mount of Mercy (Jabal El Rahme) project, which also includes a chapel honoring Saint Teresa and a museum dedicated to Saint John Paul II. Measuring 12m in height and weighing around 8 tons, the statue was installed on its 360-degree rotating pedestal in 2017. Counting the subterranean chapel dedicated to Saint Faustina, the total height of the statue is 22m. In front of the statue is an esplanade with 12 fountains representing the disciples of Jesus. Every six hours the statue rotates, so it sometimes overlooks the mountains and sometimes the coast.

The project is not limited to the statue, the chapels and the museum. It also incorporates different pedestrian trails leading to the site, in particular one from the old Kreim convent, as well as an area of the hill called Jabal El Zeitoun (the mountain of the olive trees). These trails attract pilgrims and ecotourism lovers.

How to get there
Ghosta is located 36km north of Beirut. The Mount of Mercy project is located a few hundred meters behind the Holy Savior
Monastery (Kreim) in Ghosta, 950m above sea level. To reach the monastery, take the road from Jounieh towards Harissa, passing by Bkerke, and after Harissa, continue to Ghosta. Signs will lead you straight to the site. 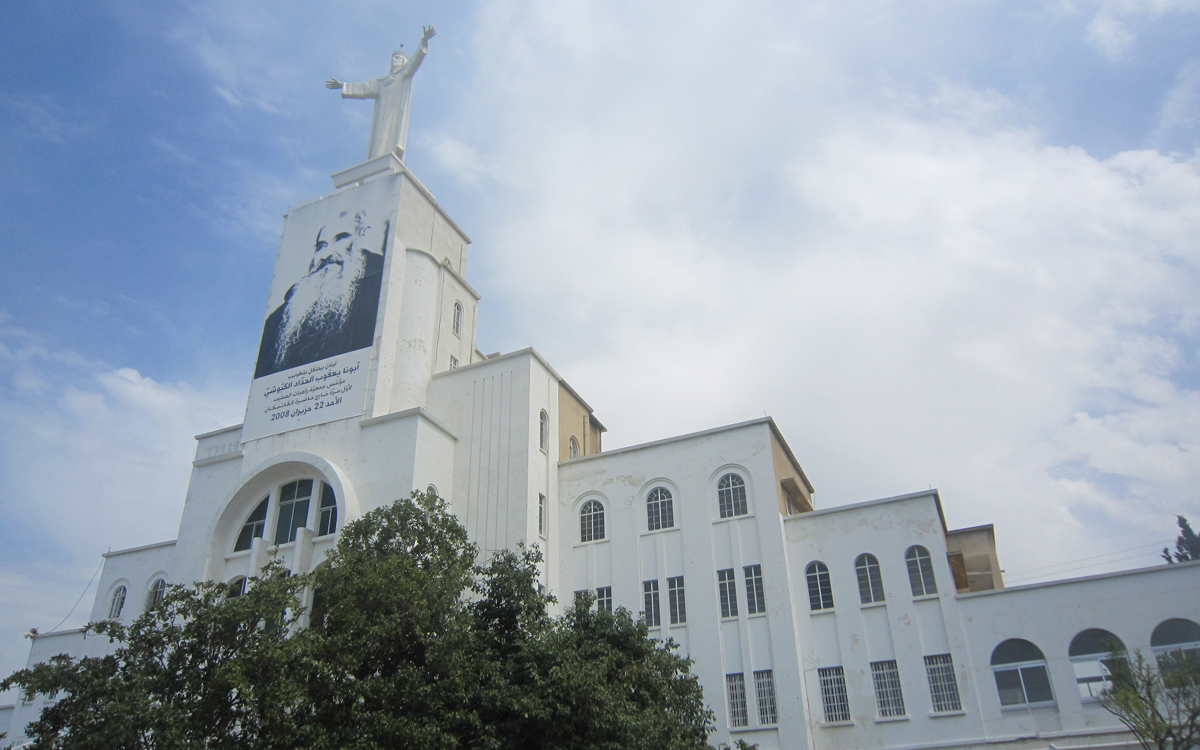 In 1895, Abouna Yaacoub Haddad was passing in front of the rocks of Nahr El Kalb on his way to take his monastic vows, where he saw the historical inscriptions on the rocks commemorating the passage of many military campaigns. The nuns reported that he said, “Christ must have a record in this place, more important than the written and engraved remains.” In 1950, he bought a piece of land on the hill called Ruins of the Kings facing the monastery of Saint Joseph Al-Bourj. He built a church in 1951 and asked the Italian artist Renato Betelia to create a statue of Jesus Christ to be placed atop, which was successfully done in 1952. Measuring 12m in height and weighing 75 tons, the statue has an elevator and a flight of stairs allowing visitors access to the top to admire the view.

How to get there
Zouk is a coastal town located 13km north of Beirut, at 90m above sea level. After passing through the Nahr El Kalb tunnel, take the right turn by the name of the sanctuary Yasou’ El Malak, in the direction of Jeita, to reach the entrance of the sanctuary.

STATUE OF THE VIRGIN MARY IN HARISSA, MOUNT LEBANON 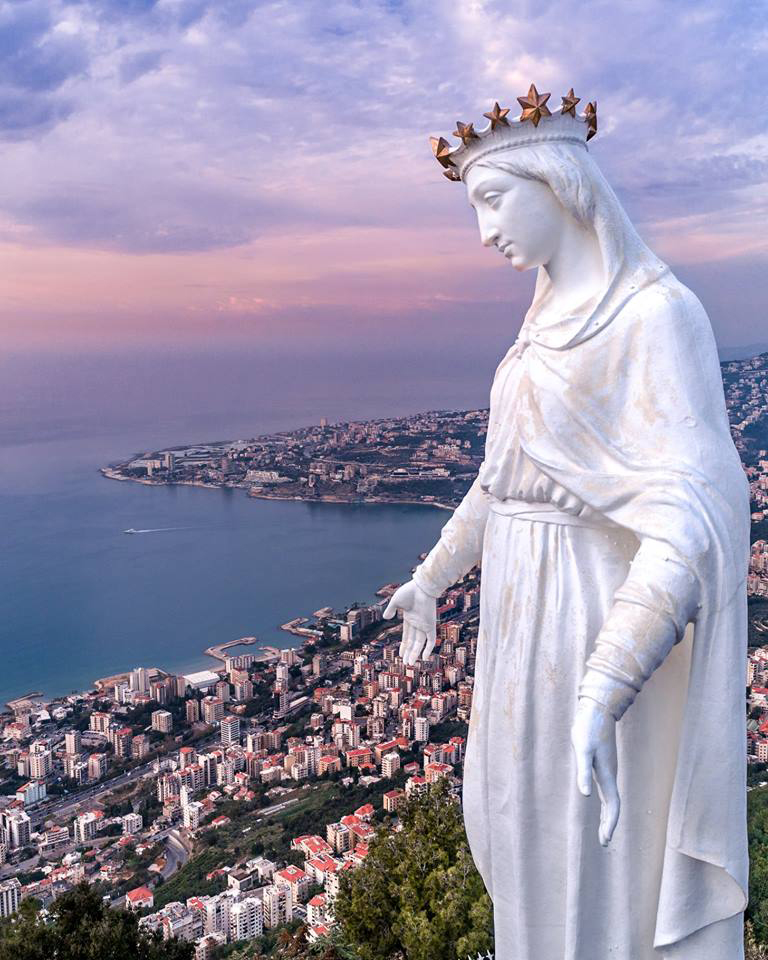 Total height: 20.5m (including 12m base)
Our Lady of Lebanon in Harissa is the most visited religious and touristic site in Lebanon. The idea of building the sanctuary in Harissa came 50 years after Pope Pius IX declared the Immaculate Conception (in 1854). The rock in Harissa was chosen to host the sanctuary, which was erected in 1904. A chapel was created inside the base of the statue and a spiral staircase was constructed around the exterior. A 104-step staircase was built to the top of the statue. Weighing 15 tons, the white painted bronze statue was made in France and brought to Lebanon in 1906, before being installed in 1908.

The chapel dedicated to Our Lady of the Light forms the lower section of the tower upon which the statue of Our Lady of
Lebanon stands. The chapel was designed by the famous French architect Gio and can seat up to 100 people. The wooden statue of Mary — that toured 426 Lebanese cities and villages in 1954 — stands next to the altar.

How to get there
Harissa is located on a hill 26km northeast of Beirut and 650m above the bay of Jounieh. Take the road from Jounieh to
Harissa, passing by Bkerke. After the famous Basilica of Saint Paul, follow the signs towards the sanctuary. It is also possible to reach Our Lady of Lebanon by cable car from the Teleferique station in Jounieh. 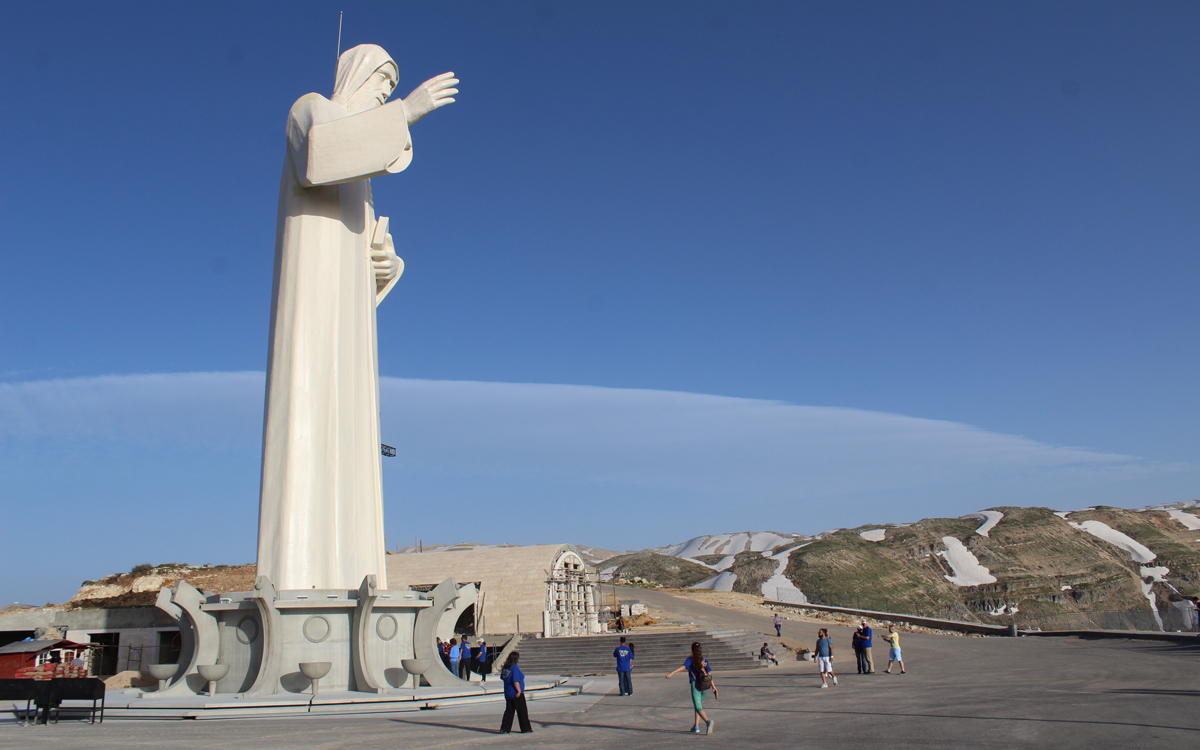 Total height: 30m (including 6m base)
In 2017, the world’s largest statue of Saint Charbel was transported to Faraya and placed atop the Mount of the Cross (Jabal El Salib), where it stands alongside a huge metal cross. The 24m statue weighs 40 tons and was created by Lebanese artist Nayef Alwan. Highly durable materials were used in its construction, and it is also said to contain something belonging to Saint Charbel himself.

How to get there
Located 30km from the city of Jounieh, Chabrouh is perched at an altitude of 1,650m above sea level. From the Greek Catholic (Melkite) Monastery of the Resurrection, founded in 1982, you can take the road to Mount Chabrouh to reach the famous statue of Saint Charbel and the cross of Faraya.

HOLY LEBANON LEBANON’S FIRST RELIGIOUS TOURISM APP
Holy Lebanon is a travel e-guide promoting religious-based tourism and supporting the sustainable development of local communities across the country. The guide lists thousands of religious attractions, rituals and events, and details of service providers. Embrace Lebanon’s religious diversity and take advantage of this practical and comprehensive tool by downloading the free application on the AppStore or Googleplay.