WHAT’S TRENDING ON LT
5 Ultimate Spring Road-Trip Destinations
10 Things to Do in Chouf
5 Things Foreigners Should Do in Lebanon
The History Behind Beaufort Castle
Beirut’s Mesmerizing MIM Museum
10 Photos That Will Make You Fall in...
Mini Guide to Chtaura
10 Things to Do in and Around Zahle
Lebanon’s Five UNESCO World Heritage Sites
5 Ultimate Tips for Your Next Camping Trip
Food HeritageLT LovesTraditional LebanonWhere to Eat & Drink 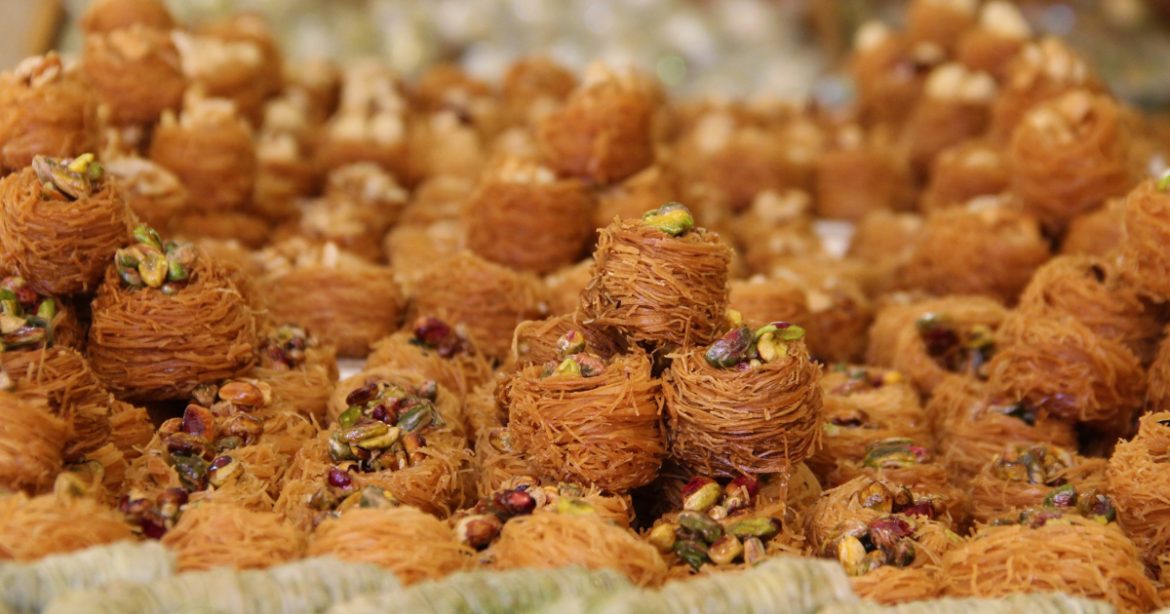 The legacy of Lebanese desserts lies in the hands of master pastry chefs, known as halwanji, who spend years perfecting dessert recipes and rise to fame with their sweet specialty.

The Haddad family started their business by specializing in jazariyyeh, sesame, hazlenut, pistachio or cashew brittles; and rice dessert filled with cream, named halawet a’rozz bi ashta, or better known as halawet shmayseh. The word shmayseh derives from shams (sun), referring to the very low fire over which the rice, sugar, water and rose water cook for seven hours, until they become a homogeneous, gelatinous mixture. The mixture is then formed into small disks, filled with cream and sprinkled with powdered sugar. Haddad Sweets experimented with the recipe and created a version mixed with powdered pistachio nuts. This dessert is mostly consumed during Ramadan and in summer, since it is light and contains no ghee.

For the past 30 years, Halimeh Harmouche has been working in the family business making dairy products, specializing in halloumi cheese and jebneh chaghale, the sweet cheese used in her famous halawet a’rozz. Made of rice, sweet cheese, sugar, water, orange blossom water and mastic, the process is labor intensive: all ingredients are pounded over a fire for two to three hours until the rice and cheese form a homogeneous white mixture with an out-of-this-world taste. Harmouche’s halawet a’rozz is special as she makes the cheese out of fresh whole milk brought from nearby farms.

Mohammad Khafaja, also known as Abu Adham, is a master pastry chef in the dessert tamriyyeh, a skill passed down through his family. Mohammad’s grandfather mastered tamriyyeh in its birthplace of Nablos, Palestine. The dessert is originally made during saints’ holidays and Assumption Day and was once sold in quarts (four cups) in front of churches. It consists of a thinly spread dough made from semolina, water and salt, cut into cubes and filled with a cooked paste of thick semolina, sugar, water, orange blossom water and mastic. It is then fried in sunflower oil and sprinkled with powdered sugar. Exempt from any dairy or animal products, it is vegan and can be consumed during Lent. In Palestine, people use the term “moutammar,” originating from the word tamer (dates) to refer to something roasted, grilled or fried to a golden color, thus the name tamriyyeh. Today, Abu Adham is the only pastry master chef in Lebanon specialized in tamriyyeh and has trained his nephew to continue the legacy.

The Sanioura family has built their reputation for pastry making since 1859. The chefs at Sanioura Sweets explain that their ancestors were experimenting with different ingredients when they came up with a “strange” dough, “gharibeh” in Arabic, from which the name of the dessert ghraybeh was derived. Later on, they remolded the dough into lozenge shapes, which were easier to fill with dates and pistachio and to pack for export to Syria and Palestine. The new shaped pastry was called sanioura, after the family name of its master pastry chefs. Made solely from ghee, flour and powdered sugar, sanioura pastries preserve well.

Qazha is hardly known outside of Saida, yet it is by far the healthiest of Arabic desserts. Known as “poorman’s food” and usually homemade, qazha (also known as habbet al baraka in Arabic, Nigella seeds in English) is originally from Jerusalem, Palestine. It is made of corn flour, sesame, sugar, olive oil and Nigella seeds ground to a paste and is black in color. Qazha is recommended for women who are breastfeeding as it increases their milk flow and has health benefits for newborn babies, since it is rich in good fatty acids. Ahmad Al Jouaidi, owner of Al Gondoline Sweets, renowned for its qazha, recalls how his grandmother often used to make it at home and conserve it in large glass jars.