WHAT’S TRENDING ON LT
5 Things to Do in Akkar
5 Ultimate Spring Road-Trip Destinations
10 Things to Do in Chouf
5 Things Foreigners Should Do in Lebanon
The History Behind Beaufort Castle
Beirut’s Mesmerizing MIM Museum
10 Photos That Will Make You Fall in...
Mini Guide to Chtaura
10 Things to Do in and Around Zahle
Lebanon’s Five UNESCO World Heritage Sites
Art, History & CultureExplore LebanonLT LovesRegionsSouth LebanonThings to doTraditional LebanonWhere to Go 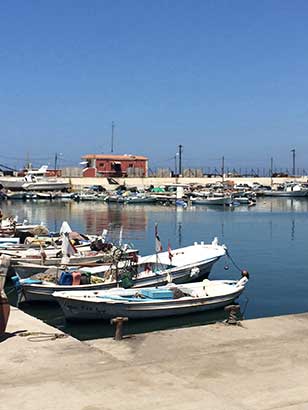 Building the boats for the fishermen of Lebanon, one modest workshop in the southern city of Saida continues the tradition of boat building

The ancient port town of Saida has an emotional connection to fishing, with the trade passed down from one generation to another over the years. Take a walk down the corniche on any day, under a bright blue sky and relentless sun, and fishing’s prevalence here is clearly visible. Rows and rows of fishing boats line the harbor, recently returned from their daily early morning fishing expedition. Fishermen sit along the seafront, fixing endless tangled nets, their faces browned by a life out at sea; an indoor fish market is a hive of activity, displaying the catch of the day from various sellers. The scent of fish, fresh or grilled, flows through the city.

Hidden out of public view, on the edge of the harbor, is Nasser Accad’s boat building workshop. In the center stands the skeleton of a boat, like the ribs of a whale, in its early stages of production. Here, the smell of freshly cut wood and sawdust overwhelms the scents of the ocean. A group of men sit drinking coffee and smoking cigarettes, pausing between the day’s labors.

The tradition of boat building in Lebanon stretches back centuries, and though the techniques might have changed, the fishing boats themselves are still modestly simple. Accad, a tall man of few words with the hands of a carpenter, inherited the trade of boatbuilding from his father, a Palestinian carpenter who used to work in Jaffa, Palestine, and Egypt, but fled to Lebanon in 1948.

For Accad, boatbuilding is the only life he’s known and it’s a trade that’s been passed down through his family. His small team of carpenters includes his brother Webhe and 17-year old son Ahmed, who has worked with his father for four years along with another carpenter Hassan Kalo. They each have their own specialism in the process of building fishing boats. Accad believes boatbuilding is a labor of love. “I love everything about it. I go home at night after a day’s work and still think about it; how I can make it better,” he says. “I can’t not think about it. It’s my passion.”

Accad moves towards the 9m long boat in progress and points to the spine, stretching from one end to the other. This curved piece of wood, named the brim, is always the first piece to be sculpted; this one is carved from three pieces of Keena wood, the most common in Lebanon. Afterwards the ribs of the boat are cut from a mold – of which many hang from the wall on one end of the warehouse – with a mechanical sawing machine and then connected to the brim with sturdy nails. This creates the core of the boat, from which the other essential pieces of wood are added from the burden boards that line the inside of the boat, to the stern that flows along the bottom. Once complete, this boat will carry four fishermen to sea and be able to bring back 10-20 kilos of fish.

The boats are made for a harsh life at sea, durable through challenging weather with a lifespan of at least 20 years before restoration is needed. “The wood’s lifespan is endless,” Accad says. “Even after 20 years it’s not the wood that is damaged, but the nails which need replacing.”

The boats, which vary in size, take around two months to build, so the small four-man team can build around four-eight per year depending on demand, with each one being sold for the modest price of around USD 8,000. With boatbuilding hubs limited to the towns of Saida, Tyre, Sarafand and Tripoli, Accad has built many of the fishing boats in this harbor and around the country. Though the elemental shape of these traditional fishing boats remains the same, models vary in their details with every port having a preference – in Tyre there’s a preference for smaller boats, in Beirut they prefer a roof.

The profession of boat building has of course made huge evolutions over the years. “There’s been a revolution. Like with the car there are new shapes, new ways to build, it’s modernized,” Accad says. “My father would cut all the wood by hand. Technology has cut down the hours we spend working. My father would start his day at 6am, now we start at 8am.”

“I can’t not think about it. It’s my passion”

Here, the family of carpenters doesn’t only spend their life on land, their relationship with the sea is strong, and for pleasure they head out to sea to fish at 3am on most days. Though the carpenters have ongoing trade, it’s also prey to the unstable situation in Lebanon and can sometimes be slow moving. “If [the situation in] Lebanon gets better and there is an evolution I will make an evolution in my work; there would be much greater potential and a demand for bigger boats,” Accad says. Still, for Accad there is no other work he’d rather do. “If you don’t love it, you can’t do it,” he adds.

Later on in the day, fisherman Mahmoud Alely, a friend of Accad and the carpenters, strolls into the harbor, after being out at sea since 7am. He jokes that he was “born a fisherman,” and as he spent his early years out on the sea with his father it was certainly in his blood. He seems to know everyone in Saida, stopping to speak to fishermen repairing their nets along the way, and nodding to restaurant owners – many who buy fish directly from him – that line the seafront.

He stops at a small modest boat made by Accad over ten years ago; it’s his own sea companion, which he named Lulu. He visits the sea alone every night at 3am to make a living. “It’s certainly a difficult profession,” Alely says. “People don’t have much money so the prices of fish can’t go up. There are fishing laws but they’re not working,” he says, referencing to the overfishing that has made stocks in Lebanon shrink. Since the days Alely used to fish with his father, as the climate has become warmer, many fish have disappeared and there is much less quantity. But, new species are always appearing and he remains cheerful. His profound connection to the sea is obvious, even his calm nature appears to reflect the stillness of the water today. You could say that Alely and Accad are part of a circular process of which the sea remains a constant. After another decade or so out at sea, Alely will return his boat Lulu, to Accad to revive its lifespan and so the process continues.