This is the story of Domaine Al-Rachid Guesthouse, a living legend made of stone, paint, colors and life. How did I end up there? My friend Peter, the grandson of Rachid Nasr, invited me to visit and I accepted with pleasure.

I made my way to Chtaura, took the Hermel road and kept on going straight along the highway, bordered by Bedouin farmers working in never ending fields, until I reached to the village of Jdeydet el-Fekha, then I took my second right after the white church and two minutes up the alley, I arrived at Domaine Al-Rachid. 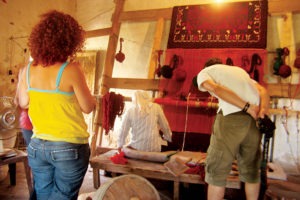 I was welcomed with the warmth only a Lebanese highlander could give and while walking to the house through the garden I couldn’t help but notice the amazing mix of local wild life, landscaping and irrigation, decorated with vintage and modern industrial objects and lights. On the garden terrace I was piled with cold drinks, freshly picked blue berries, locally grown apricots and deep red cherries. We then retired to the rooftop gazebo for a rest.

The gazebo’s bamboo roof lent a fresh summer feel, while the floor seating with its embroidered pillows and small intricately painted tables gave the area an arabesque style. In the middle of the gazebo was a table filled with delicacies: A pot of steaming hot Turkish coffee, fresh juices, famous Baalbaki Saj bread, a platter of shiny vegetables and a local dish called Ambaris, similar to Labne but made in a clay pot.

After the rest I was taken on a tour of the house, although I had already briefly seen the impressive paintings and calligraphy on the house doors and bedroom walls, I was astounded when I heard the story of how it all began.

Having been an officer in the French army, Rachid was appointed to a succession of administrative posts in the Lebanese army. He was a French, Arabic and Bedouin dialect translator for the forces. His gift for self-learning, his razor sharp memory and his love for his community lead him to memorize and recite poetry at social gatherings. This encouraged him to form a local club: Al Sanabel at his home, where village folks would gather once a week and share readings, poems and stories. The club even distributed a regular publication in the village. 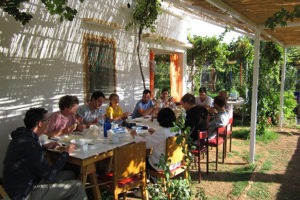 In 1976, some time after his retirement from the army, Rachid, at the age of 83, began his first endeavor at painting. Arab authors and poets, as well as the Bible and the Quran, inspire his arabesque style, known as naïve art. This hobby continued for the next twenty years and took 5,000 hours to complete. Rachid stopped painting in 1996, four years before his death. Rachid Nasr made the 107 years he’s lived a blessing and inspiration to his family, friends, society and even us guests who visit Domaine Al-Rachid, nowadays a guesthouse.

After a tour of this incredible house with its water canals and gardens it was time for lunch. A typical menu includes homemade Maqloubet batinjien (aubergine and rice), Safsouf, Salatet Bakleh (parslane salad) and sweet Ma’mouniyyeh. Nawal, the cook, had freshly picked the vine leaves from the garden for use. I got to eat with the staff and was able to meet the whole crew that formed this happy family. Unfortunately I had to leave shortly after lunch, but I can’t wait to go & try out one of the tours with those lovely folks from beyond the norm.

Economically Domaine Al-Rachid hires people from the villages of el-Fekha and Jdeydet el-Fekha, paid responsible tours contribute to the livelihood of the local communities in places with or without entrance fees, local know-how was solicited in the refurbishment of the house, all food and materials purchases are local and follow locally-made food products, supporting rural families are sold at the Domaine. 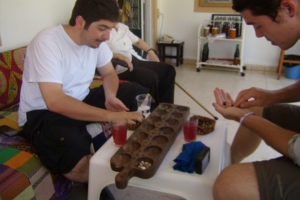 Culturally Domaine Al-Rachid preserves and sustains the heritage of the family represented by both grandparents: Rachid and Madeleine Nasr, from one side and develops the continuity of this heritage through the sons in modern times.

Then the contribution broadens to support the preservation of the heritage of the North Bekaa through the visits guests make to historical and traditional places while meeting local folk and promoting the entire region in a ‘responsible tourism’ kind of way. The Domaine is open for the public and can accommodate up to 12 people in two painted rooms.

Apart from the wonderful experience within Domaine Al-Rachid, guests can enjoy a variety of cultural, religious and adventure activities:

• Cultural tours of Jdeydet el-Fekha, Ras Baalbeck and Hermel: Meeting local craftsmen such as carpet weavers and oud makers. Visiting the local molasses museum and historical sites such as Qamouaa el-Hermel (a tower tomb from 200 BC) and St Maroon Troglodyte Monastery (caves) where it is believed that the followers of St Maroon took refuge in the 9th century before entering Mount Lebanon.

• Adventure tours including rafting on the Orontes River.

Eco Museum of the Bekaa