Eco-Museum of the Bekaa - Lebanon Traveler
WHAT’S TRENDING ON LT
Download the Magazine
A visit to the oldest winery in Lebanon...
The Forgotten Cave of Saint George, Jounieh’s Hidden...
The Hidden Gems of Clemenceau
Stay at Beautiful Bkerzay
Discovering Maqam El Nabi Ayyoub in Niha
Discovering Al Haush Guesthouse
The Past and Present: 5 Photos from Mount...
A Look Inside Saydet El Mantara: Our Lady...
8 Things to do Before Winter Ends
Mini Guide to Tyre
20 Things to Do in Beirut

Eco-Museum of the Bekaa

With the progress of modernization and the destruction in mass of modest habitation built of stones and mud bricks, it has become necessary to find ways to preserve some of these traditional homes to save an important part of the culture, the economic, social and family organization of rural societies of the past. To promote this traditional heritage a Museum of Rural Life was created by the Lebanese National Heritage Foundation.

Curator and museum specialist, Juliana Khalaf, takes a look at this very different and interesting museum.

The Terbol Museum opened its doors to the pubic in 2004 primarily for the sake of preserving an icon of rural vernacular architecture, but also to keep the remnants of a traditional way of life from disappearing altogether. A simple mud-brick farmhouse in the village center, it withstood the test of time and eventually attracted the attention of the foundation, which decided to refurbish it and create a museum on the site.

The project’s objectives to preserve this type of architecture and make visitors aware of the importance of this heritage sheds light on Lebanon’s rural societies’ cultural, economic, social and family organization. The museum is located near the municipality of Terbol, in the Zahlé region, in the heart of the Bekaa valley, at a distance of 45 km east of Beirut.

explains Jean-Marc Bonfils, the award-winning architect who worked on the rehabilitation of the original building. He was one of 10 volunteers who brought the project to fruition. “Nostalgia is a very powerful tool, and if used with an optimistic approach, it becomes something productive,” he adds.The architectural roots of theses houses can be traced back to antiquity. The technical know-how of building these adobe houses has become extinct. However, thanks to the surviving remnants privately owned by a family living in the region, this technique has been revived.

Located in a 2000 square meter field, the 150 square meter whitewashed mud structure, made out of sun-dried bricks coated with clay & marl, took over a year & cost around $50,000 to restore. The roofing is constructed from wooden beams that are covered with reeds and tamped clay while all the columns are made of tree trunks.

L shaped, the house is divided in the traditional liwan, youk & tabout. Dating back more than 2,000 years, the liwan is essentially a covered terrace, supported by retaining walls, with a courtyard in front & is frequently seen in Bekaa households. The liwan is further divided into the living room or dar & the storage room, where grains were stocked for the winter season. The youk is equivalent of a closet for the mattresses & the tabout, the burial area.

The museum also displays a collection of regional ethnographical and historical agricultural tools. Keep in mind that the approximate time to tour the museum is one and a half to two hours.

One of the rooms is used as an audio-visual space where documentaries and videos are displayed to elaborate on the museum’s history and architectural technique of the mud house.

A visit to the boutique is well worth it as you may find traditional local produce and handicrafts, as well as books, post cards and CD-Roms on Lebanese architecture, agriculture, culture and regional traditions.

The visit would not be complete if you do not roam around the garden of this traditional rural home. Located where the original cowshed, stable and barn were, the garden tour offers a comprehensive study on the ancestral agricultural tradition.

The garden is partitioned in a manner to guide visitors through the traditional crops and plants of the valley. Among the trees are poplars and junipers used to build the framework of the house. Other plants found in the garden are fruit trees and vines, vegetables, grains and herbs.

The museum is open from May to November, 10 am to 6 pm daily (closed on Mondays).

What not to miss

Traditional tannour baked bread sandwiches on sale at the cafeteria.

Outdoor activities in the area

The Kfar Zabad and Amiq wetlands, the numerous agricultural fields found in the valley, the various Bekaa vineyards, the Qaraoun Lake and, of course, archaeological sites such as Baalbeck,Anjar and Niha. 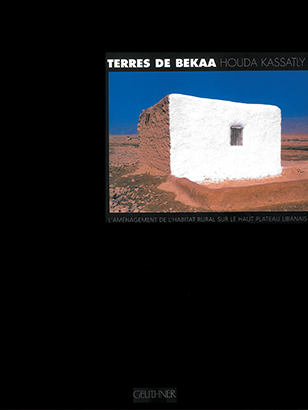 A recommended read is Lands of the Bekaa by Houda Kassatly, an anthropologist, ethnologist and photographer. Published by the National Heritage Foundation and Nayla Kettaneh Kunigk of the Espace Kettaneh Kunigk Art Gallery (Tanit), it offers a comprehensive study on traditional houses and dwellings throughout the Bekaa.

Built in the same manner as the Terbol Museum, The Taanayel

eco-lodge offers visitors the experience of living in these traditional adobe houses.

Jean Jabbour, a farmer who looks after the grounds of the museum, and his niece, Rita, who takes tourists around the museum.