WHAT’S TRENDING ON LT
Lebanon’s Five UNESCO World Heritage Sites
5 Ultimate Tips for Your Next Camping Trip
5 Places in West Bekaa Worth Visiting
Discovering the Beauty of the Cedars of God
La Datcha: Haven in Akoura
5 Things to Do in Akkar
Digging into Sidon’s History
Baalbeck: the ‘Sun City’
10 Things to Do in Anjar
Exploring Baskinta with Al Wadi Al Akhdar
AgendaArt ExhibitionsArt, History & CultureBeirutExplore LebanonMuseumsRegionsThemesThings to doWhere to Go 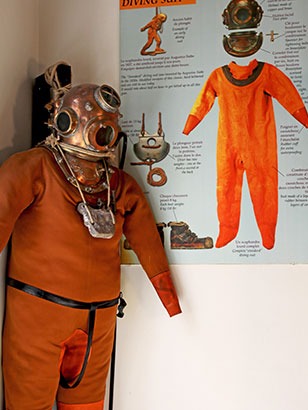 In the midst of the Jdeideh industrial zone lies a calm haven of culture and mystery. Created by brother and sister team, Assad and Janine Yazbeck, the Wonders of the Sea museum offers a unique escape to the world under the sea.

Located 10 minutes from the heart of Beirut, a traditional Lebanese house dating back to the 19th century hides within its walls the secrets of the deep waters. The Wonders of the Sea Museum offers an educational and cultural experience unlike anything you’ve ever seen. The aim of the museum is not to merely inform and entertain, but also to inspire a sense of ecological responsibility. Visitors are compelled to think twice before harming or polluting the sea in order to ensure the safety of those adorable little creatures they were introduced to.

The visit usually begins in the projection room, which was left intact in its original décor, dating back at least a century. Notice the curtains and the details of the ceiling then dive into the film highlighting the live section of the museum, with short stories about the aquarium’s inhabitants.

Once the film is over, it’s time to take a stroll through the different sections of the museum. Good lighting and informative bilingual signage (English and French) make the stay quite agreeable. The piece de resistance is the seashell section, which contains one of the biggest and most extensive collections in the region. Janine Yazbeck who owns the museum with her brother Assaad, began collecting seashells since she was 9. What once began as a little girl’s hobby turned into a beautiful display of unique shells from all over the world. She went on to study oceanography and now shares her passion through the Wonders of the Sea museum.

As you walk around, you will observe different varieties of seashells: smallest to largest, male and female, colored to white. You will see shapes and sizes you never knew existed. Don’t miss the murex, an important shell in Lebanese history when the Phoenicians used it to extract the color red.

Continue on to the invertebrate section where you will discover a wide collection of sponges, crustaceans, corals and sea urchins scientifically classified. Some of the species have transversal cuts, enabling you to see the inside of the shell. Notice that the invertebrate’s bodies are compartmentalized, and the animal lived in the larger section.

Moving on to the equipment section, you will see historical nautical equipment that was used on boats. From the telegraph to the scuba suit, you will go back in time and see how it was done in the old days. You would be interested to know that in the waters off the Lebanese coast, you can find dolphins and sharks. Check out the teeth of a shark, up close and personal in the replica section.

One of the most popular sections of the museum is the salt-water aquariums, where you can discover the different species of fish, crustaceans and sea urchins. From crabs, to octopus, starfish or seahorses, you will learn all about the peculiarities of each and every species. For instance, it is the father seahorse that incubates and gives birth to the babies, and porcupine fish, when scared, puff up their bodies projecting spines as a defense mechanism. Finally, in a room all alone, brace yourself for the ferocious shark!  The 6-year old shark that has reached its adult size, approximately 30cm long might look harmless swimming on its own in circles, but don’t get too close… Of course at the museum, you can observe him quite safely.

Once your visit is over, you can relax in the garden that surrounds the house. Kids will enjoy feeding the ducks and the fish in the pond, while parents take a well-deserved break.

Please note that as of March 2020, the museum closed its doors for further notice.

Take a short walk to the Jdeideh Municipal garden. There are several snack shops across the road, as well as a number of restaurants in the vicinity:

• If you are driving, parking is available.

• Do not forget your camera, as photo opportunities are numerous especially in the garden.

• Bring some old bread for the ducks & fish.