WHAT’S TRENDING ON LT
Beit Tamanna: a Dream Come True in Beirut
5 Things to Do in Akkar
5 Ultimate Spring Road-Trip Destinations
10 Things to Do in Chouf
5 Things Foreigners Should Do in Lebanon
The History Behind Beaufort Castle
Beirut’s Mesmerizing MIM Museum
10 Photos That Will Make You Fall in...
Mini Guide to Chtaura
10 Things to Do in and Around Zahle
LT LovesNews & Editor's PicksReligious SitesThings to doTraditional Lebanon 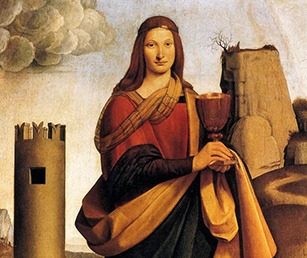 In Lebanon Eid El Barbara is all about good food and fun-filled memories. It is a longstanding tradition where kids wear disguises and roam their neighborhoods looking for treats. And no it’s not Halloween! 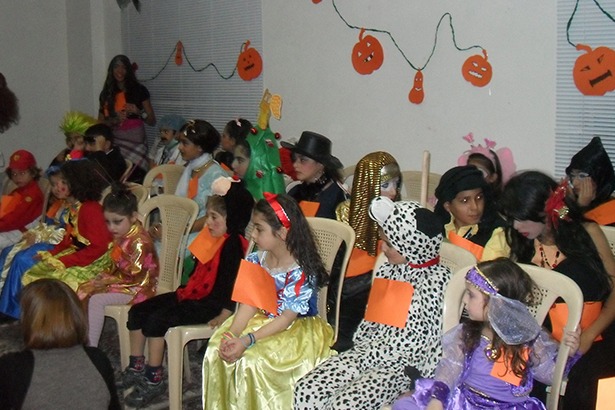 The legend has it that Barbara was the daughter of a rich pagan named Dioscorus, who kept her in a tower to shelter her from the outside world. But, to his dismay, she embraced the Christian religion. After hearing his daughter’s confession, he drew his sword to kill her when miraculously, an opening appeared in the tower wall and she was transported to a mountain gorge, where she disguised herself and hid. Later she was found, tortured and condemned to burn. However, her wounds healed instantly, and the torches kept burning out. Finally, she was beheaded at the hands of her father, when all other methods failed.

“Her wounds healed instantly, and the torches kept burning out”

Saint Barbara, a Virgin Martyr, is the patron saint of firefighters, soldiers, etc., those who have dangerous professions. She died by the sword, but her killers were struck down by lightning, so she is often called on for protection from lightning and from violent and unpredictable death. She is one of the ‘Fourteen Holy Helpers’, a group of saints venerated together in Roman Catholicism. But, because of doubts about the historical accuracy of this story, Saint Barbara was removed from the Catholic liturgical calendar in 1969. However, like Saint Christopher and Saint Expedite, who were similarly “de-sainted” at the same time, her popularity continues unabated.

The iconography of Saint Barbara generally shows her dressed in white and red. The sky may be dark and foggy, with jagged flashes of lightning above. Often the tower, in which she was kept captive, is depicted in the background, but in some images, she holds a small model of a tower in her hands or wears a crown that mimics the crenelated top of a stone fortress-tower.

In addition to the tower, images associated with Saint Barbara include the sword with which she was beheaded, a chalice, the palm branch of her martyrdom, and the lilies of virginity. A little plant bearing white daisy-like flowers, either Feverfew or Life Everlasting, often blooms at her feet.

The Lebanese celebrate Eid el Barbara (which literary means the Feast of Barbara) on the eve of December 3rd in commemoration of her martyrdom on the 4th. Saint Barbara, whose name means barbarian woman, is believed to have lived at around 300 AD and according to local legend she was a young Roman girl who lived in the Bekaa region. Loyal to pagan gods, in this version, her father was governor of the Roman city of Baalbek. And yes, he kept his daughter under lock and key in a tower.

“He kept his daughter under lock and key in a tower”

The story continues that she converted to Christianity, and to elude her father, she disguised herself when she escaped from the tower. Thus the tradition of dressing up was created. While fleeing persecution, Barbara supposedly ran through a freshly planted wheat field, which magically grew instantly to cover her path and hide her. But the soldiers eventually captured her and she was beheaded on orders of her father. The legend goes on to say that lightning struck the father and he died shortly after.

A local tradition on this day is to plant wheat seeds (or chick peas, barley grains, beans, lentils, etc.) on a bed of cotton wool. The seeds germinate and grow to 6 inches in time for Christmas, when the shoots are used to decorate the nativity scene, usually placed below the Christmas tree to recreate one of Barbara’s miracles.

According to legend, kids when roaming the neighborhood scream, “hesuhlee ya Barbara”, imploring Barbara to run away. And, replicating her escape, kids of all ages change their appearance, dress up and put on masks. Then, they meet up with their friends and go around the neighborhood collecting treats that vary from chocolate to money. 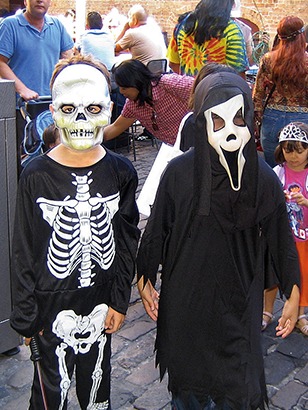 But treats are not free. The kids pay for them by singing a song or by dancing accompanied by tambourines and derbake (a type of hand drum). There is also a special song for the occasion with many variations depending on the situation. If, after the performance, the host gives the kids a good treat, they reward them with song that ends with a compliment. If not, the song ends with an innocent insult, which results in kids running away as quickly as they can.

Even school activities revolve around Eid El Barbara, as kids draw, cut and decorate their own cardboard masks. Upon returning home, many proudly wear their mask and surprise their parents. In the old days, parents used whatever was handy to dress up their children, and kids were so happy to wear their mother’s dresses and father’s jackets.

If you want to join in on the fun, just check out one of several churches dedicated to Saint Barbara. Or, visit the southern Christian village of Maghdouche, where Eid El Barbara is celebrated with a masquerade parade through the streets. Another option is Baalbeck, where the Greek Catholic Cathedral is dedicated to her, and believing that Barbara was a local girl, this regal city celebrates in style. In fact all you have to do is follow the trail of noise in your neighborhood. All in all it is a day to share joy, laughter and lots of sweets!

Like any joyous occasion, Eid el Barbara is also about food. According to Barbara’s story, she hid in wheat fields, which is why a special wheat dessert is prepared. Boiled barley is flavored with orange blossom water and served with almonds, pistachios, raisins, walnuts, pine kernels, and sweetened with either sugar or honey. 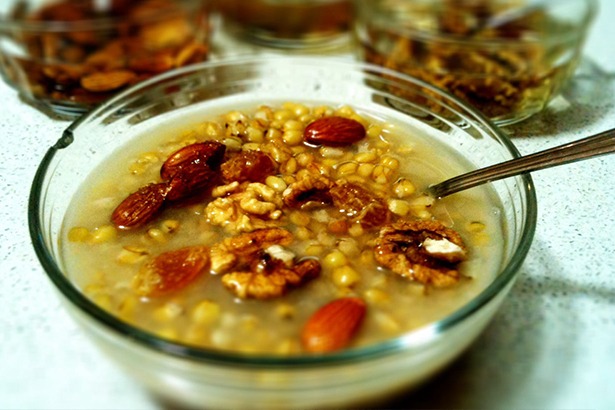 Other traditional deserts include maacroons and aawamat, which are basically two different versions of fried dough soaked in sugar syrup and qatayef, a sweet dough, like a crepe, filled with either ashta (cream) or a mixture of crushed walnuts with sugar and orange blossom water with a drizzle of sugar syrup. A high calorie feast indeed!